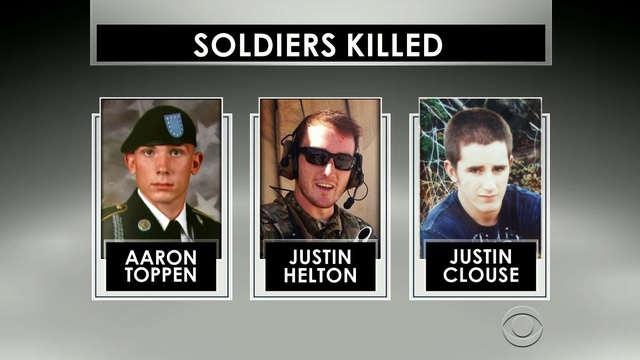 MOKENA, Ill. -- A soldier from Illinois who deployed to Afghanistan a month after his father died and a soldier from Ohio who was engaged to be married were among the five Americans killed in a friendly fire airstrike this week.

Family representatives of Aaron Toppen of Illinois and Justin Helton of Ohio told The Associated Press that military members came to their relatives' doors in the middle of the night to deliver the news of the deaths.

CBS News has identified two of the other American soldiers killed in the strike as Justin Clouse, 22, of Sprague, Washington, and Scott Studenmund, 24, of Pasadena, Calif. The remaining victim has not yet been identified. One Afghan soldier also died in the incident.

Pentagon spokesman Rear Adm. John Kirby said the five American troops were killed Monday "during a security operation in southern Afghanistan." Officials said an airstrike was called in after the unit was ambushed by the Taliban. It was one of the deadliest friendly fire incidents in nearly 14 years of war.

A U.S. official confirmed to CBS News the aircraft involved in the incident was an American bomber.

Family members of Toppen, 19, remembered him Tuesday as a kind-hearted man who had aspired to a career in the military or law enforcement.

"Aaron was predisposed to serve. He was very keen to be in the military," his uncle Jack Winter said. "He was quite proud to be there."

It was the second death of a loved one for the family this year. Toppen, from the Illinois city of Mokena, about 40 miles southwest of Chicago, was set to leave for Afghanistan in February. But his gravely ill father died that month, and he stayed for the funeral. He deployed in March.

Toppen was a graduate of Lincoln-Way East High in Frankfort, Illinois, and loved the outdoors, especially fishing. Family members at the home Tuesday circulated a picture of Toppen as a young child sitting next to his father in a fishing boat.

"He was something somewhat rare in youth culture today. ... In a word, I would summarize what he had as 'class,'" Winter said of his nephew. "So rarely now do you see somebody like that who truly does have class, who's polite, humble, loyal, who's a kind-hearted soul, generous."

Toppen was the youngest of three children.

Helton, 25, had been in the Army since 2010 but had been in Afghanistan for only about two months, according to cousin Mindy Helton. It was his first deployment, and he expected to be home in about six months, she said.

She said her cousin specialized in dealing with explosives and was based out of Fort Bragg, North Carolina. She also said he was engaged. His parents live in Beaver, a two-hour drive east of Cincinnati, Ohio.

"He was a great boy, so full of life and outgoing," she said. "He loved hunting and the outdoors."

The 2006 graduate of Beaver's Eastern High School was known to friends and family as Buck and was a quiet leader, Robert Day, his high school baseball coach, told WCMH-TV in Columbus.

Tim Hattle, who had known Helton since grade school, told the station that he messaged his friend on Facebook last week.

"He said time was really dragging over there. I said, 'Just don't worry. You'll be home soon.' And to be safe," Hattle said. "Then I told him I loved him."

In Sprague, Washington, news of Justin Clouse's death was greeted Tuesday morning with fond memories at his high school, according to CBS News affiliate KREM.

Clouse was "rather quiet, but he was a quiet leader," schools superintendent Pat Whipple told KREM. He said it was a small community, so "you get pretty attached... the whole community is grieving."

KREM spoke to one of Clouse's former coaches, who said he had had kept in touch with the soldier after he joined the army.

"I talked to him Saturday actually," said Chad Prewitt. "He's the type of kid, the first thing he asks is, 'Hey, old man. How you doin? How's the family?' He's in Afghanistan and he's more worried about how I'm doing."

KREM said flags at Sprauge High School were flying at half-staff on Tuesday in memory of the former student.

"He was just so excited to serve his country," Prewitt told the station. "Big heart. Big burly guy on the outside. And you'd see him and think he was such a strong guy. But deep down, he was one of the most caring people I've ever met."

In Pasadena, the family of Scott Studenmund told CBS 2 in Los Angeles that he had been a Green Beret and U.S. Army staff sergeant, who worked his way up the Army's ranks.

"He was just a force to be reckoned with, he was fierce," said Mary Lyon, a family friend. "He was super athletic, super smart, but just dedicated. It's just very raw right now, and when you send your child off to serve in the military, this is always the risk. But you just hope and pray it never happens."

"Scott was tenacious," Perry Skaggs told the station. "He was determined, he was a warrior, and he actually led the team in tackles that year, if I'm not mistaken. He had an engine that just kept revving."