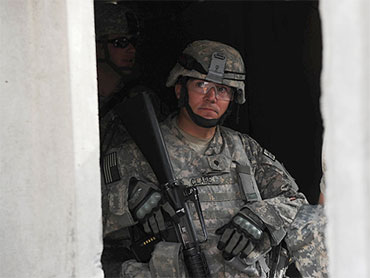 A crowd of about 300 villagers yelled "death to the United States" and blocked a main road in eastern Afghanistan on Thursday as they swore that U.S. forces had killed three innocent villagers, officials said.

The gulf between the two accounts is a reminder of how sensitive every NATO operation in Afghanistan has become. In Taliban-heavy areas it is hard to distinguish villagers from insurgents and sometimes public opinion turns against coalition forces even when they say they are certain they targeted the correct people.

And while NATO has drastically reduced the civilian deaths it causes, the military coalition still makes mistakes. In the first six months of this year, 386 civilian were killed by NATO or Afghan government forces - 41 during search and seizure operations such as night raids, according to the United Nations.

The Taliban issued a statement decrying the U.N. report, which said insurgent groups were responsible for 76 percent of civilian deaths and injuries in the first half of 2010.

The U.N. "plays a major role as a propaganda organization for the American imperialism and keeps covering up the blatant crimes of the Pentagon," the group said in an email to The Associated Press.

Elders from Zarin Khil village said American troops stormed into a family's house and shot three brothers - all young men - and then took their father into custody, Abed said. Police are investigating the allegations but could not yet confirm or deny the account, he said.

NATO called the men "suspected insurgents" and a spokesman, Capt. Ryan Donald, said they drew weapons and pointed them at the coalition troops.

According to the elders, there was no fighting before the troops entered the house, Abed said.

Abed said he did not have more detailed information because he was unable to leave the police compound.

"If we go out, maybe fighting will start," he said.