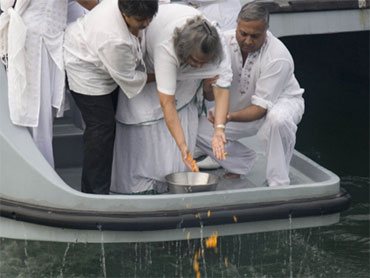 Six decades after his death Saturday, some of Mohandas K. Gandhi's ashes were scattered off the coast of South Africa, where he was confronted by racial discrimination during a 21-year sojourn and developed some of his philosophies of peaceful resistance.

An early morning service in a harbor in the eastern city of Durban on the 62nd anniversary of Gandhi's death included the laying of flowers and candles on the water's surface.

Gandhi, known as the Mahatma or "great soul," was shot dead by a Hindu hard-liner in 1948 in New Delhi. His ashes were divided, stored in steel urns and sent across India and beyond for memorial services. It was not unusual for some of the ashes to have been preserved instead of scattered as intended.

Gandhi first came to South Africa to work as a lawyer in the Indian community.

Soon after his arrival in South Africa in 1893, Gandhi, was thrown off a train for refusing to leave the "whites only" compartment. As a result, he threw himself into the fight for human rights in South Africa.

Gandhi lived in homes and farms across South Africa for two decades, before returning to India at the age of 46 to help fight for independence from Britain.

A large number of South Africans are descended from indentured workers brought from India in the 19th century to work on sugar plantations in the Durban area.

In 2007, some of Gandhi's ashes were sent to a Gandhi museum in Mumbai by an Indian businessman whose father, a friend of Gandhi, had saved them. Those ashes were scattered in the sea off Mumbai in 2008.

In 1997, ashes that had been found in a bank vault in northern India were immersed at the holy spot where India's Ganges and Yamuna rivers met.