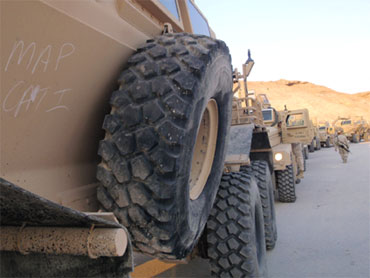 The U.S. Marine Corps wrapped nearly seven years in Iraq on Saturday, handing over duties to the Army and signaling the beginning of an accelerated withdrawal of American troops as the U.S. turns its focus away from the waning Iraqi war to a growing one in Afghanistan.

The White House worries the bans could raise questions over the fairness of the March 7 parliamentary elections, which are seen as an important step in the American pullout timetable and breaking political stalemates over key issues such as dividing Iraq's oil revenue.

The Marines formally handed over control of Sunni-dominated Anbar, Iraq's largest province, to the Army during a ceremony at a base in Ramadi - where some of the fiercest fighting of the war took place.

If all goes as planned, the last remaining Marines will be followed out by tens of thousands of soldiers in the coming months. President Barack Obama has ordered all but 50,000 troops out of the country by Aug. 31, 2010, with most to depart after the March 7 parliamentary election.

The remaining troops will leave by the end of 2011 under a U.S.-Iraqi security pact.

But concerns about the success of the election - and perhaps the loss of hard won security gains that the Marines helped cement - are on the rise because of a growing political dispute that could see more than 500 candidates blacklisted because of suspected ties to previous regime.

The changeover at Ramadi, west of Baghdad, leaves the U.S. Army's 1st Armored Division with responsibility over both Baghdad and Anbar, the vast desert province that stretches from western Baghdad to the borders of Syria, Jordan and Saudi Arabia.

The province was once the heart of the deadly Sunni insurgency that erupted after the U.S.-led invasion in 2003. In the battles for control of the cities of Fallujah and Ramadi, the Marines saw some of the most brutal and deadliest fighting of the war.

Violence began dropping off in the province in late 2006 when Sunni fighters - known as Awakening Councils - turned against al Qaeda and sided with the Marines to fight the insurgency.

As many as 25,000 Marines were in Iraq at the peak, mostly in Anbar province. The few thousand who remain - except for U.S. Embassy guards and advisers in Baghdad - are expected to ship out in a matter of weeks.

The upcoming parliamentary election is also considered an important step toward speeding the U.S. troop pullout and seeking progress on stalled political initiatives. Among them: passing laws clarifying the rules for foreign oil investment and dividing the revenue among Iraq's main groups.

But plans to ban hundreds of candidates have raised deep concerns in Washington that the voting could widen rifts between the majority Shiites who gained power after Saddam's fall and Sunnis who are struggling to regain influence.

Biden, who arrived late Friday, had a full agenda of meetings with Iraqi leaders including Prime Minister Nouri al-Maliki, who has strongly supported the blacklist and has resisted attempts at possible American mediation.

Some Sunni leaders have accused the Shiite-led government of using the ban as a political tool. But al-Maliki insists that Iraq must purge all ties to Saddam's Sunni-dominated regime. A vetting panel has put 512 names on the blacklist and more are expected.

Iraqi government spokesman, Ali al-Dabbagh, told The Associated Press that al-Maliki's meeting with Biden reinforced the stance that the election rules are "an Iraqi affair to be decided by the Iraqis themselves."

Al-Dabbagh said Biden was careful not to "give the wrong message that America wants to interfere in the Iraqi affairs."

There was no immediate word from Biden or his aides on the talks.

Biden's schedule also includes a meeting with Iraqi President Jalal Talabani, who has asked for a legal review on the blacklist. The courts are expected to examine whether the vetting panel has legal grounding because it does not have formal parliamentary approval.

The panel includes two controversial Shiite figures: Ali al-Lami, who was once detained by the U.S. military over a 2008 attack in a Shiite district of Baghdad; and Ahmed Chalabi, who is blamed for supplying U.S. officials with faulty intelligence on Saddam's weapons program prior to the 2003 invasion.

Al-Lami is also a candidate in the March elections - raising further complaints from Sunnis about possible political motives behind the list.
By Associated Press Writer Adam Schreck; AP Writers Matt Apuzzo and Bushra Juhi in Baghdad contributed to this report