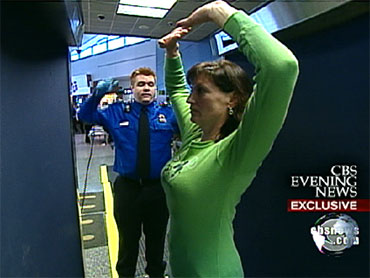 A new national survey suggests that public opinion is fairly quickly turning against the new airport security procedures the government is implementing, leading to increased pressure on the Transportation Security Administration to reverse course on the new, controversial measures.

The TSA has come under fire for its new full-body scanning machines, which have been put to use in 70 U.S. airports since last month, as well as the new "enhanced" pat-down searches TSA workers are conducting on travelers who refuse to go through the new machines. The TSA has so far asked for the public's cooperation as it implements the new procedures. The agency and the Obama administration have also pointed to last week's CBS News poll to suggest people aren't as outraged as media reports suggest. According to that poll, conducted Nov. 7-10 and released Nov. 15, 81 percent of Americans said they supported the use of the full-body scanners.

Now, however, a new Washington Post/ABC News poll, conducted Nov. 21, puts public support of the scanning machines 17 percentage points lower than the CBS News poll did. Sixty-four percent of respondents in that poll said they supported use of the machines, while 32 percent said they were opposed to the machines. Support drops to 58 percent among Americans who say they fly at least once a year.

Additionally, the poll found that half of Americans think the new, thorough pat downs go too far.

The marked shift in public opinion comes after a week of backlash led by offended travelers and civil libertarians and subsequently picked up by some lawmakers and heavily covered by the media.

The firestorm started after a video went viral featuring John Tyner, a man who recorded his enhanced pat-down on Nov. 13 and warned the TSA agent not to "touch his junk." In the days following, Comedy Central's "The Colbert Report" ran a lengthy segment ridiculing the TSA procedures, and the tech website Gizmodo published a slideshow of 100 images from full-body scanners that it obtained after filing a Freedom of Information Act request. Saturday Night Live mocked the pat-down procedures, and Capt. Chesley "Sully" Sullenberger, known for successfully landing a plane in the Hudson River, spoke out against them.

The day before CBS News released its poll, protests against the new security measures, organized online, gained enough momentum to spur the TSA to call the New York Times.

The organizers of "Opt-Out Day" want travelers on Wednesday to "opt out" of going through the scanners, prompting physical inspections that will slow down air travel on one of the busiest travel day of the year. The goal is to cause enough disruption at airports to cause the TSA to reconsider their new procedures.

The New York Times' Nate Silver, known for his analysis of polling data, predicts the TSA will quickly respond to the backlash. He points out that the Washington Post/ABC poll shows that as many as 20 percent of respondents said they would be less likely to fly because of these new procedures, which could have economic or safety implications. He also points out that the TSA has modified a number of its past procedures; for instance, in 2007, the TSA reversed its policy prohibiting lighters on planes.

"It is perhaps foolish to predict how the T.S.A. will respond this time," Silver writes. "But caution aside, I would be surprised if the new procedures survived much past the New Year without significant modification."

The head of the Transportation Security Administration, John Pistole, told CBS News anchor Katie Couric that the agency is already looking into ways to effectively change its policies.

Pistole said, "What we have done is go back to those entities such as the GAO (Government Accountability Office) and the inspector general who have done covert testing to show that we are not being thorough enough in our screening because they're able to get through the screening, gone back to them and to say, OK, how can we be better informed if we modify our screening then what are the risks we deal with, so that's what we're dealing with."

Significant changes are not expected before the Thanksgiving weekend, however, and the TSA has said that while it is open to refining its techniques, it has no plans to abandon them.