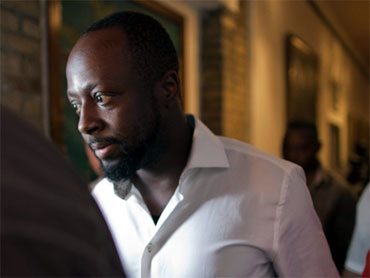 The Haitian-American hip-hop star expressed disappointment at the late Friday ruling, but called on his followers to act "peacefully and responsibly."

"Though I disagree with the ruling, I respectfully accept the committee's final decision, and I urge my supporters to do the same," the former Fugees frontman said in a statement.

"I want to assure my countrymen that I will continue to work for Haiti's renewal; though the board has determined that I am not a resident of Haiti, home is where the heart is — and my heart has and will always be in Haiti."

On Saturday, Jean attended a church service in his mother's hometown and prepared to fly back to the United States where his wife and daughter live. He did not speak to the news media.

Questions remained about whether he will stay involved with the presidential election, perhaps by throwing his support to one of the 19 candidates Haiti's electoral council approved for the Nov. 28 election.

The commission did not say why it had disqualified Jean, but the singer had faced a challenge to his candidacy because he has not lived in Haiti for the past five years as required.

Election officials also rejected the candidacy of Jean's uncle, Raymond Joseph, who is Haiti's ambassador to the United States.

The commission approved 19 candidates and rejected 15, spokesman Richardson Dumel told journalists. While rejecting Jean, the board approved two leading contenders: former Prime Minister Jacques-Edouard Alexis and Yvon Neptune, who was the last prime minister under ousted President Jean-Bertrand Aristide and has been active in helping to coordinate reconstruction efforts.

Also allowed to run are: Jude Celestin, head of the government's primary construction firm and the candidate supported by President Rene Preval; and Michel Martelly, a well-known Haitian singer known as "Sweet Mickey." The Constitution bars Preval from running for re-election.

Jean had apparently been aware which way the decision would go. The 40-year-old entertainer had been in a hotel near the electoral commission office but left abruptly without speaking to journalists about an hour before the announcement. He issued his statement later.

Dozens of police and U.N. peacekeepers in riot gear were stationed outside the office, but there were no signs of protests or unrest.

Despite his final rejection, Jean attracted global attention to a race in which almost no one outside Haiti could even name any of the candidates.

"His candidacy certainly did shake things up," said Laurent Dubois, a Haiti historian and professor at Duke University. "But it's still a very important election whether Wyclef is in it or not."

Jean, who gained famed as a member of the Fugees before building a solo career, had no political organization, not much of a following beyond his fans of his music and only a vague platform, casting himself as an advocate of Haiti's struggling youth and saying he would ask reconstruction donors to help the country's dysfunctional education system.

He also faced persistent criticism over alleged financial mismanagement at the charity he founded, Yele Haiti. He stepped down from the charity at the beginning of his campaign.

Some Haitians questioned the seriousness of the aspiring candidate, who left the desperately poor Caribbean nation as a boy.

"I don't think he's a politician at all," said Etienne St. Cyr, a pastor who helps at a camp for homeless earthquake survivors at the Petionville Country Club. "Maybe he's not what we need right now."

St. Cyr said Jean failed to win over the people camped in squalid tents on the slope of a golf course, noting they already have allegiances to established political parties and the singer had not visited the camp.

Earlier this week, Jean said he had received death threats from somebody who called and told him to get out of Haiti.

The winner of the November vote will take charge of recovery from the Jan. 12 earthquake, coordinating billions of aid dollars in a country with a history of political turmoil and corruption. The quake killed an estimated 300,000 people and left the capital, Port-au-Prince, in ruins.

The devastation, coupled with frustration over a weak government response, created an opening for a messianic outsider like Jean, said Robert Fatton Jr., a Haiti expert at the University of Virginia.

"The very fact that he is taken seriously when ... he has no preparation to be president, is an indication that the whole country, in particular the youth, looks at the typical Haitian population as a bankrupt kind of species," Fatton said.

Fatton said he suspects the delay in announcing the candidate list, which was initially supposed to be released Tuesday, owed to a struggle among the political elite, with some trying to keep Jean from running.

Although he is not officially in the race, Jean could still influence the election by helping to mobilize the youth vote, said Mark Jones, a professor of political science at Rice University in Houston.

"The other candidates should try to get him on their team," he said.