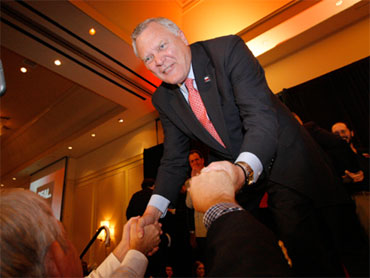 Staggering Election Day losses are not the Democratic Party's final indignity this year.

At least 13 state lawmakers in five states have defected to Republican ranks since the Nov. 2 election, adding to already huge GOP gains in state legislatures. And that number could grow as next year's legislative sessions draw near.

The defections underscore dissatisfaction with the Democratic Party - particularly in the South - and will give Republicans a stronger hand in everything from pushing a conservative fiscal and social agenda to redrawing political maps.

In Alabama, four Democrats announced last week they were joining the GOP, giving Republicans a supermajority in the House that allows them to pass legislation without any support from the other party. The party switch of a Democratic lawmaker from New Orleans handed control of Louisiana's House to Republicans for the first time since Reconstruction.

In Georgia, six rural Democratic state legislators - five from the House and one in the Senate - have switched allegiance to the GOP since Nov. 2. In Maine, a House Democrat flipped; in South Dakota, a Democratic state senator.

Most of the party swaps are in the South, where GOP rule is becoming more entrenched and Democrats - many of them already more conservative than their counterparts elsewhere - are facing what looks like a long exile in the minority.

In Georgia, the GOP swept every statewide office this year and brought, in the words of state Rep. Alan Powell, "an effective end, at least for the foreseeable future, to the two-party system in state government."

Powell, who served in the House for two decades as a Democrat from a rural district in North Georgia, joined the Republican caucus this month after concluding it would allow him to get off the sidelines and again be a player on key issues. The 58-year-old real estate agent has been outspoken in his criticism of both Republicans and Democrats and expects to maintain an independent streak in the GOP.

Twenty-one state legislative chambers in 16 states moved into GOP hands this year, and for some Democrats keeping a seat at the table means trading a "D" for an "R." Others, like Mike Millican of Alabama, one of those who joined the GOP last week, say that as the national Democratic Party has moved to the left, they've found themselves more in line with the Republican Party's political ideology.

In most cases, those who've jumped ship said the Democratic Party abandoned them - not the other way around.

"The Maine Democratic agenda is too focused on the bidding of various special interests," said state Rep. Michael Willette, as he joined the GOP less than two weeks after being elected as a Democrat.

The changes in allegiance come after - and, in part, because of - big Republican statehouse wins across the country this election cycle.

"This was a wave election," said Tim Storey, an elections expert with the National Conference of State Legislatures. "So you will probably see that wave continue with even more Democrats moving over as the impact of the election settles in."

The GOP picked up a whopping 690 seats Nov. 2 - the largest shift since 1966, according to data compiled by the National Conference of State Legislatures. In addition to the legislative chambers Republicans took from Democrats, an ongoing recount in New York will help determine which party controls the state Senate there.

Republicans now control both chambers of the state Legislature as well as the governorship in 21 states.

The shifts come as legislatures are set to begin the politically charged, once-a-decade process of redrawing congressional and legislative districts to reflect updated U.S. Census population estimates. Typically, the party in power gets the chance to preserve strongholds or change districts once considered safe for the other party, meaning Republicans can solidify their majorities.

Carolyn Fiddler, spokeswoman for the Democratic Legislative Campaign Committee, acknowledged the process will be a challenge for Democrats.

"We know that in some cases folks are scrambling to keep their districts," she said.

But she noted those switching parties "should also remember they were elected with Democratic resources and Democratic volunteers."

How that will play the next time the former Democrats are up for election remains to be seen.

Voters have not been kind to some of the more prominent converts recently. U.S. Sen. Arlen Specter lost a Democratic primary battle in Pennsylvania after abandoning the Republican Party, losing to a more liberal congressman who was later defeated in the general election. U.S. Rep. Parker Griffith of Alabama switched from Democrat to Republican this year only to lose in the GOP primary.

But since the civil rights era of the 1960s the South has been growing increasingly Republican, in part because of Democrats changing their party affiliations.

Georgia's Gov. Sonny Perdue and his soon-to-be-successor Nathan Deal are both former Democrats and have been embraced by voters after switching over.