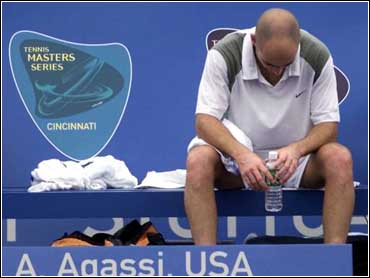 Top-seeded Andre Agassi retired from his second-round match at Tennis Masters Series-Cincinnati on Wednesday because of back problems that have hampered him since a minor fender-bender last month.

"It's frustrating," Agassi said. "It's unfortunate."

Agassi, playing Fernando Vicente of Spain, won the first set 6-3 but lost the second 3-6. During the crossover after the first game of the third set, Agassi asked for a trainer and then retired.

Agassi was rear-ended in an accident near his home in Las Vegas on July 8. In his only tournament since then, he lost in the first round last week at Toronto.

He beat Wayne Ferreira of South Africa on Tuesday and said he thought he would be all right to continue.

"It was a little stiff waking up this morning, but that's somewhat normal at 30," Agassi said. "It loosened up OK, then I felt it getting tight again."

Fatigue set in late in the first set, Agassi said.

"Then in the second it felt like someone kicked me in the back," he said.

Agassi said he would probably take some time off.

"There's not a whole lot you can do besides not irritating it further," he said. "The first step is to see how it is tomorrow."

Earlier, the hard-court tournament lost its third seed, Magnus Norman of Sweden, who continued his slide from the top of the tennis world.

Norman, who is second in the ATP Champions points race, was upset by Slava Dosedal of the Czech Republic 7-6 (4), 6-3, 6-3. He hasn't reached the third round in his last three tournaments.

"I haven't played well since I came to North America," Norman said. "I'm too tense. I'm not playing my game. My recent success has put a lot of pressure on me. It's a whole new situation for me to be the favorite.

"When I was 20th in the world, no one cared about me. No one wanted to interview me and no one wanted my opinion on anything."

Fifteenth-seeded Tim Henman of Britain beat Mariano Puerta of Argentina 6-1, 6-2. Puerta, who prefers to play on clay, has won only eight games in the last four sets against Henman.

"He's one of those players whose game I match up with well," Hnman said. "I had a clear game plan today, and I executed it comprehensively."

Sixteenth-seeded Mark Phillipoussis of Australia needed three sets and two tie-breakers to advance to the third round with a 6-7 (3), 6-4, 7-6 (4) win over Marcelo Rios of Chile. No. 13 Franco Squillari of Argentina beat Jiri Novak of the Czech Republic 6-3, 6-4.