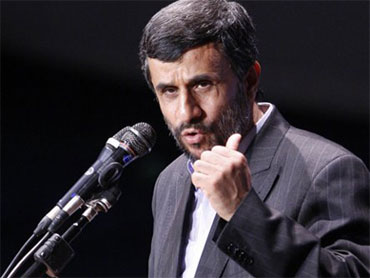 The Iranian leader said he plans to visit New York for the next U.N. General Assembly in September, as he has several times since coming to power in 2005.

During the trip, "we are ready to sit with his Excellency Obama, face to face, free and before media, to put the world's issues on the table to find out whose solution is better," Ahmadinejad said in a speech to visiting Iranian expatriates aired live on state TV.

Ahmadinejad has repeatedly proposed televised debates with American presidents over the past years, an offer dismissed by Washington.

The U.S. accuses Tehran of seeking to build a nuclear weapon, a claim Iran denies. The United Nations has imposed four rounds of financial sanctions on Tehran for its refusal to halt uranium enrichment, a process that can be used to produce fuel for a reactor or a warhead. Iran says it has a right to conduct enrichment for what it says is its peaceful nuclear program.

In his speech, Ahmadinejad derided the sanctions, saying "how many resolutions you have passed? Four? Pass as many as you can to make it 4,000."