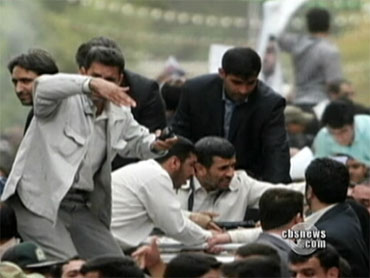 Iran's president says his enemies exaggerated a firecracker incident near his motorcade to overshadow an important speech he was delivering in the western town of Hamedan.

Tehran has said that Wednesday's explosion near Mahmoud Ahmadinejad's convoy was just an excited fan setting off a firecracker, denying earlier reports of an assassination attempt on the president.

The incident happened as Ahmadinejad was driving to a stadium, where he later addressed supporters and criticized Western demands that Iran halt its nuclear activities.

The blast set off a flurry of media reports, including one that it was a handmade grenade - a report at first confirmed by a source in Ahmadinejad's office.

But as the motorcade moved on and as the uninjured president made no mention of an attack, the event was soon re-written by Iran's official state media, reported CBS News correspondent Mark Phillips.

State IRNA news agency on Thursday quoted Ahmadinejad as saying enemies tried to prevent his "words from reaching the world."

"Ahmadinejad is trying to downplay the threat to him," said CBS News security analyst Juan Zarate. "The threat to the regime may signal the fact that he actually does feel there is a threat."

The crackdown on the opposition in Iran may now be more subtle than it was in the days following the disputed election in June 2009, but there is still plenty of discontent, despite Ahmadinejad's claim in a CBS interview last week that he speaks for all of Iran.

Ahmadinejad had recently accused Israel of plotting to assasinate him.