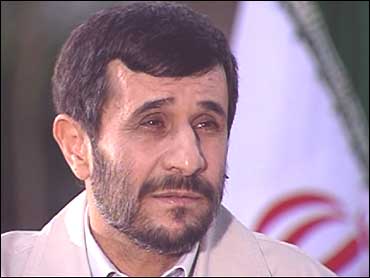 The Iranian leader says he's skeptical that most Americans view his visit there as insulting as his intention was only to show respect. The interview will be broadcast Sunday, Sept. 23, at 7 p.m. ET/PT.

His request to lay a wreath at the World Trade Center site in New York City next week was turned down by police Thursday and blasted by U.S. diplomats as an attempt to turn ground zero into a "photo op."

Ahmadinejad, who is to arrive Sunday to address the U.N.'s General Assembly, asked the city and the U.S. Secret Service earlier this month for permission to visit the site of the Sept. 11, 2001, attacks.

The request to enter the fenced-in site was rejected because of ongoing construction there and due to security concerns, police spokesman Paul Browne said Wednesday.

Asked if he intends to press his request to visit the site, Ahmadinejad tells Pelley, "Well, it was included in my program. If we have the time and the conditions are conducive, I will try to do that."

"But the New York Police Department and others do not appear to want you there. Do you intend to go there anyway?" Pelley asks.

"Well, over there, local officials need to make the necessary coordinations. If they can't do that, I won't insist," the president replies.

"Sir, what were you thinking? The World Trade Center site is the most sensitive place in the American heart, and you must have known that visiting there would be insulting to many, many Americans," Pelley says.

"Why should it be insulting?" Ahmadinejad asks.

"Well, sir, you're the head of government of an Islamist state that the United States government says is a major exporter of terrorism around the world," Pelley replies.

Ahmadinejad says: "Well, I wouldn't say that what American government says is a-- is the prerequisite here. Something happened there which led to other events. Many innocent people were killed there. Some of those people were American citizens obviously. We obviously are very much against any terrorist action and any killing. And also we are very much against any plots to sow the seeds of discord among nations. Usually you go to these sites to pay your respects. And-- also to perhaps to air your views about the root causes of such incidents. I think that when I do that, I will be paying, as I said earlier, my respect to the American nation."

"But the American people, sir, believe that your country is a terrorist nation, exporting terrorism in the world," Pelley says. "You must have known that visiting the World Trade Center site would infuriate many Americans."

"Well, I'm amazed. How can you speak for the whole of the American nation?" Ahmadinejad says. "You are representing a media and you're a reporter. The American nation is made up of 300 million people. There are different points of view over there."

White House spokesman Gordon Johndroe said a visit to ground zero "is a matter for the city of New York, but it seems more than odd that the president of a country that is a state sponsor of terror would visit ground zero."

Mohammad Mir Ali Mohammadi, spokesman for the Iranian mission to the U.N., said he was not notified officially that Ahmadinejad would not be allowed at the site, but said it was unfortunate.

"President Ahmadinejad intended to lay a wreath at the site of ground zero in order to pay tribute to the victims of the terrorists attack of Sept. 11, 2001. We are hopeful that we can still work something out with the police department," he said.

Port Authority and police representatives decided at a meeting that no dignitaries would be allowed inside the site, said Port Authority spokesman Steve Coleman.

The United States, its European allies and other world powers suspect Iranian authorities of seeking nuclear weapons, although Iran insists its uranium enrichment program and other atomic activities are aimed only at producing energy.

The U.S. ambassador to the United Nations, Zalmay Khalilzad, told reporters Wednesday that the United States would not support Iran's attempt to use the site for a "photo op."

"Iran can demonstrate its seriousness about concern with regard to terrorism by taking concrete actions," such as suspending its uranium enrichment program and dropping support for Lebanese militant group Hezbollah, Khalilzad said.

It was not clear whether Ahmadinejad wanted to descend to the base of the trade center site, where the fallen twin towers stood, or to lay a wreath on a public sidewalk outside the site.

Iran and the U.S. have not had diplomatic relations since 1979, when Washington cut its ties with Tehran after Iranian students stormed the U.S. Embassy in Tehran. The Bush administration has accused Iran of arming Shiite Muslim militants in Iraq and seeking to develop nuclear weapons.

In a television appearance earlier this week, Ahmadinejad said his country wanted peace and friendship with the United States, despite mounting tensions between the two countries.

In a related development, the U.S. also denied a visa to Iran's United Nations ambassador in Geneva to attend next week's General Assembly meeting because he was involved in the 1979 U.S. hostage crisis, a U.N. official said.

It was not clear what role the ambassador, Ali Reza Moaiyeri, allegedly played in the hostage drama. The U.N. official who said his visa was denied spoke on condition of anonymity because there has been no public announcement.

Richard Grenell, spokesman for the U.S. Mission to the United Nations, said, "although we don't comment about specific visa cases we certainly would not allow a person into the United States who has taken Americans as hostages."