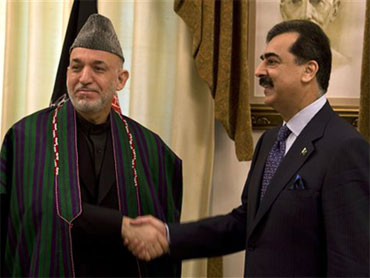 The Afghan government was holding secret talks with the Taliban's No. 2 when he was captured in Pakistan, and the arrest infuriated President Hamid Karzai, according to one of Karzai's advisers.

The detention of Mullah Abdul Ghani Baradar - second in the Taliban only to one-eyed Mullah Mohammed Omar - has raised new questions about whether the U.S. is willing to back peace discussions with leaders who harbored the terrorists behind the Sept. 11, 2001 attacks.

Karzai "was very angry" when he heard that the Pakistanis had picked up Baradar with an assist from U.S. intelligence, the adviser said. Besides the ongoing talks, he said Baradar had "given a green light" to participating in a three-day peace jirga that Karzai is hosting next month.

The adviser, who had knowledge of the peace talks, spoke on condition of anonymity because of their sensitivity. Other Afghan officials, including Abdul Ali Shamsi, security adviser to the governor of Helmand province, also confirmed talks between Baradar and the Afghan government. Several media reports have suggested that Baradar had been in touch with Karzai representatives, but these are the first details to emerge from the discussions.

Talking with the Taliban is gaining traction in Afghanistan as thousands of U.S. and NATO reinforcements are streaming in to reverse the Taliban's momentum. That has prompted Pakistan and others to stake out their positions on possible reconciliation negotiations that could mean an endgame to the eight-year war.

Officials have disclosed little about how Baradar was nabbed last month in the port city of Karachi. The Pakistanis were said to be upset that the Americans were the source of news reports about his arrest.

The capture was part of a U.S.-backed crackdown in which the Pakistanis also arrested several other Afghan Taliban figures along the porous border between the two countries, after years of being accused by Washington of doing little to stop them.

Far from expressing gratitude, members of Karzai's administration were quick to accuse Pakistan of picking up Baradar either to sabotage or gain control of talks with the Taliban leaders.

Whatever the reason, the delicate dance among Karzai, his neighbors and international partners put the debate over reconciliation on fast forward.

Top United Nations and British officials emphasized last week that the time to talk to the Taliban is now. The Afghan government, for its part, has plans to offer economic incentives to coax low- and mid-level fighters off the battlefield. Another driving force is President Barack Obama's goal of starting to withdraw U.S. troops in July 2011.

The United States, with nearly 950 lives lost and billions of dollars spent in the war, is moving with caution on reconciliation.

At a breakfast meeting in Islamabad last week, Karzai said he and his Western allies were at odds over who should be at the negotiating table. Karzai said the United States was expressing reservations about talks with the top echelon of the Taliban while the British were "pushing for an acceleration" in the negotiation process.

"Our allies are not always talking the same language," he said.

Karzai said overtures to the Taliban stood little chance of success without the support of the United States and its international partners. He says his previous attempts to negotiate with insurgents were not fruitful because "sections of the international community undermined - not backed - our efforts."

The U.S. has said generally that it supports efforts to welcome back any militants who renounce violence, cut ties with al Qaeda and recognize and respect the Afghan constitution, but it is keeping details of its position closely held.

Daniel Markey with the Council on Foreign Relations said that while Karzai is having discussions with senior people on the Taliban side, "it's not clear that Washington or other members of the international community have weighed in as to what they believe are the red lines or proper boundaries with respect to negotiations with the Taliban."

During his trip to Afghanistan last week, U.S. Defense Secretary Robert Gates said it was premature to expect senior members of the Taliban to reconcile with the government. He said until the insurgents believe they can't win the war, they won't come to the table. U.S. Secretary of State Hillary Rodham Clinton has said she's highly skeptical that Taliban leaders will be willing to renounce violence.

A U.S. military official in Kabul, who spoke on condition of anonymity to discuss reconciliation, said the top commander in Afghanistan, U.S. Gen. Stanley McChrystal, has not yet solidified his opinion on this issue.

He said the U.S. is still debating the timing of the Afghan government's outreach to senior leaders of three main Afghan insurgent groups - Omar; Jalaluddin Haqqani, who runs an al Qaeda-linked organization; and Gulbuddin Hekmatyar, the boss of the powerful Hezb-e-Islami.

The official added that the international military coalition had no problem with the Afghan government's reaching out to anyone, at any time, but is concerned that a deal to end the violence not come at too high a price.

Deep differences remain within the Obama administration on reconciliation, said Lisa Curtis, a research fellow on South Asia for the Heritage Institute, a right-leaning think tank in Washington. "This disagreement is contributing to a lack of clarity in U.S. official statements on the issue and leading to confusion among our allies," she said.

"The military surge should be given time to bear fruit," Curtis argued. "Insurgents are more likely to negotiate if they fear defeat on the battlefield."

Karzai won't discuss his administration's talks with Taliban members or their representatives, but several Afghan officials confirmed that his government was in discussions with Baradar, who hails from Karzai's Popalzai tribe of the Durrani Pashtuns in Kandahar.

"The government has been negotiating with Mullah Baradar, who took an offer to the Taliban shura," Shamsi said, using the word for the group's governing board.

Shamsi said he'd seen intelligence reports indicating that Omar resisted the offer and that Baradar's rivals within the Taliban leadership were fiercely opposed to any negotiations with the Afghan government.

An intelligence official in southern Afghanistan, who spoke on condition of anonymity because he was not authorized to talk with journalists, said there were reports that Omar was angry about Baradar's negotiations with the government and asked Pakistani intelligence officials to arrest him.

Nevertheless, Hakim Mujahed, a former Taliban ambassador to the United Nations, said many Taliban leaders are willing to talk.

"The problem is not from the Taliban side," he said. "There is no interest of negotiations from the side of the foreign forces."

Hamid Gul, a former director of the Pakistani intelligence service who has criticized the U.S. role in Afghanistan, said the insurgents want three things from the U.S. before talks could begin

a clearer timetable on the withdrawal of troops, to stop labeling them terrorists, and the release of all Taliban militants imprisoned in Pakistan and Afghanistan.

Some analysts claim Pakistan wanted to interrupt Karzai's reconciliation efforts or force Karzai to give Islamabad a seat at a future negotiating table.

"I see no evidence to support that theory," Richard Holbrooke, U.S. envoy to Pakistan and Afghanistan, told reporters this month. "I know somewhat more than I'm at liberty to disclose about the circumstances under which these events took place and every detail tends to work against that thesis."

Another theory is that Baradar, deemed more pragmatic than other top Taliban leaders, was detained to split him from fellow insurgents. McChrystal said recently that it was plausible that Baradar's arrest followed an internal feud and purge among Taliban leaders.

If Karzai was still angry about Baradar's arrest, he didn't show it publicly last week on a two-day visit to Islamabad. His message was twofold - that Pakistan had a significant role to play in reconciliation and that its cooperation would be welcomed. He called Pakistan a "twin" and said Afghans know that without cooperation, neither would find peace.