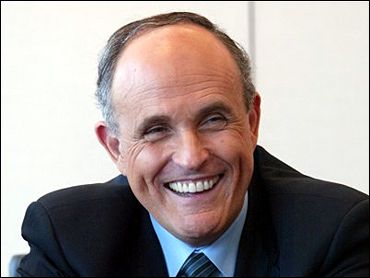 Rudolph Giuliani's top political aide said Monday it will not be possible for the former New York City mayor to run for governor or challenge Senator Hillary Rodham Clinton's re-election bid next year.

But, aide Anthony Carbonetti cautioned: "Rudy is someone who never says never."

"Right now, with all the commitments he has here ... I just see the commitment as too great to undertake any sort of run within the next year," Carbonetti told The Associated Press.

Carbonetti, who was Giuliani's chief of staff when Giuliani was mayor, cited his consulting firm, Giuliani Partners, and the recently announced plan to open a New York office of Bracewell & Patterson, a Texas-based law firm. The office is to be named Bracewell & Giuliani.

Giuliani, a Republican, was running against Clinton for the Senate in 2000 until he withdrew while battling prostate cancer.

Independent polls have shown both of them to be top contenders for their respective parties' 2008 presidential nominations. Asked about a Giuliani bid three years from now, Carbonetti said he does not have to make that decision soon.

Speculation in New York Republican circles is that Governor George Pataki will not run for a fourth term next year, raising the possibility that Giuliani might go after the job.

Carbonetti said if Pataki does run for a fourth term as governor, Giuliani would back him.