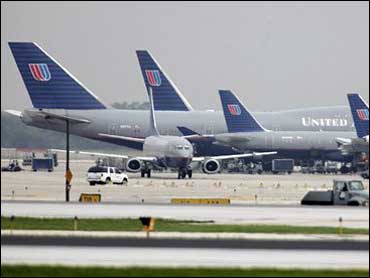 A flurry of confirmed and reported talks among airlines may signal merger mania within the struggling industry, though analysts question whether consolidation is a sure — or even a good — thing.

UAL Corp.'s United Airlines and Continental Airlines Inc. are exploring a possible combination, according to published reports late Tuesday. On Wednesday, AirTran Holdings Inc. said it has made a $290 million stock and cash bid for Midwest Air Group Inc., valuing the smaller airline at $11.25 per share, a 24 percent premium to its closing stock price Tuesday on the American Stock Exchange.

The AirTran offer was made on Oct. 20 and Oak Creek, Wis.-based Midwest declined it at the time. AirTran Chairman and Chief Executive Joe Leonard sent another letter on Wednesday stating that AirTran would continue to pursue the transaction.

And Qantas Airways, Australia's flagship carrier, fended off a takeover bid led by an investment bank and two private-equity firms.

All this activity comes on the heels of the recent hostile $8.67 billion takeover bid that US Airways Group Inc. made for Delta Air Lines Inc., whose top executive has rebuffed the offer.

The preliminary talks between United and Continental were reported late Tuesday by The Wall Street Journal and The New York Times, though no specifics were given and both papers cautioned that a deal was far from certain.

A United-Continental pairing could face significant obstacles, since Northwest Airlines Corp. may be able to stop it under a 2000 agreement with Continental.

In that pact between airlines allied in a code-share agreement, Northwest received a "golden share" of Continental — giving it the power to halt any potential acquisition of the Houston-based airline — in exchange for letting Continental buy back some of its stock that Northwest held.

But with U.S. airlines strongly interested in consolidation, it's possible that differences could be resolved in separate deals.

Airline consultant Michael Boyd said a United-Continental combination, or any other combination for that matter, would not be good for consumers, as it would reduce competition. He described any offer by United as an effort to make "fast money."

"Glenn Tilton has called everyone looking for a date," Boyd said, referring to United's chief executive. "He doesn't want to run an airline, he wants to merge it."

Indeed, Tilton on Tuesday spoke up again as a strong advocate of U.S. airline mergers, telling analysts in Chicago that consolidation is "good and overdue for the industry."

"We are not waiting for opportunities to come to us simply because we haven't identified to you which one works best," Tilton said at the conclusion of a 3½-hour management presentation to more than 75 analysts.

However, he declined to tip his hand about strategy or discuss any merger efforts under way involving his carrier. United declined to comment on the reports Tuesday night; a Continental spokesman did not immediately return a phone call seeking comment.

Tilton, among other industry officials, believe mergers would boost airlines through cost-cutting and increased revenues.

But Kevin Mitchell, the chairman of the Business Travel Coalition, said if such a "tsunami" of airline consolidation were to occur, the repercussions for fliers would be disastrous, in that fares would surely rise as competition waned.

"Other merger proposals would follow as sure as the sun rises in the east," he said. "What's more, these poential transactions represent a near-term fix to the industry's difficulties and do not address systemic profitability problems and root causes."

Analysts said a sweetened bid could sway Qantas' management to accept a buyout.

In its statement, Qantas said its "non-executive directors consider that the terms of the proposal are not acceptable" — a possible signal that not all Qantas executives are opposed to the deal.

"Without seeing the conditions, it is hard to see what those sticking points are, but I wouldn't read it as an outright rejection," said BT Funds Management's Troy Angus. "We think this is still just early stages. They haven't rejected the bid outright, they have just said that some of the terms are unacceptable."

While airlines have rebounded from the troughs they fell into just a few years ago, mainly by laying off workers and reducing operating costs, they still must battle the high cost of fuel. Many industry analysts and consultants believe consolidation would help in this environment, by enabling carriers to cut overlapping routes and reduce available seat capacity, making it easier to raise fares.

Others aren't so sure such combinations make sense, noting the industry's troubled history at getting cooperation from labor groups, not to mention the difficulties of bringing different fleets, maintenance schedules and cultures under one umbrella.

"You're dealing with a lot of emotion here that may not make sense in the light of day," Boyd said.