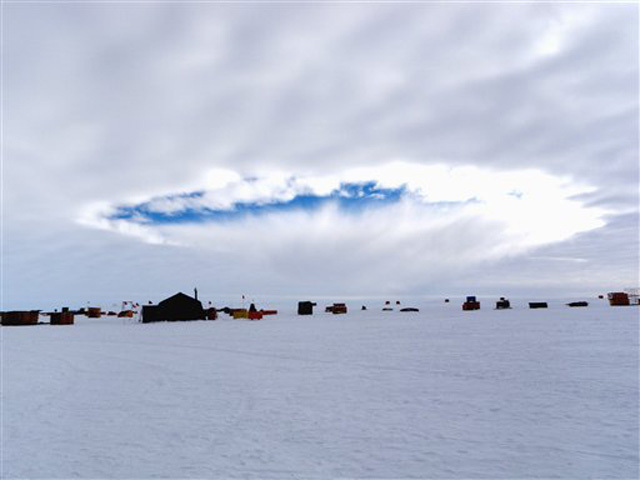 WASHINGTON - Airplanes flying through super-cooled clouds around airports can cause condensation that results in more snow and rain nearby, according to a new study.

The correct conditions for this inadvertent weather modification occur about 5 percent of the time - but 10-to-15 percent in winter - according to Andrew J. Heymsfield of the National Center for Atmospheric Research in Boulder, Colo., lead author of the study appearing in Friday's edition of the journal Science.

Aircraft take off into the wind, he noted, so if they are generating extra ice particles upwind of an airport, the result can be snow right on the airport. That might mean planes will require more de-icing, he said, though other researchers weren't so sure.

The team was investigating holes or canals that are sometimes seen drilled in clouds after an airplane has passed through.

Studying six commercial airports, they found that increased snow and rainfall occurs in areas where the unusual cloud holes appear, usually within 60 miles (100 kilometers) of the airport. Places farther away from an airport are more likely to be at higher altitudes, above the clouds.

The added rain or snowfall occurred when conditions in the clouds were super-cooled. That means the clouds were made up of water droplets that were colder than freezing, but which had not yet frozen.

Water in the atmosphere can remain liquid at temperatures below freezing if it doesn't have any type of nucleus to freeze onto, such as bits of dust or salt. It will freeze without a nucleus when it gets very cold, however - about minus 40 degrees(minus 15 Celsius).

It turns out, when an airplane passes through one of these clouds the movement of air around the tips of the propeller, or over the wings of a jet, causes a sudden cooling of the air, sometimes down to the critical point where the droplets freeze. They then can fall to earth as snow or rain, depending on whether or not the air is warm enough to melt them on the way down.

But that still did not explain why the holes and canals can be so wide, much larger than the narrow airplane passing through the clouds.

So they used a computer model to study what was happening, and found that heat released when the water freezes warms the air around it, causing the air to move upward at the center of the hole and spreading out to move downward at the edges.

Chris Westbrook of the University of Reading in England, said what is new in this study is that use of a computer model to study the reaction of the cloud to this process, in particular the effect on the air motion around the hole.

Westbrook, who has done similar research but was not part of this team, said that finding differs from what has been seen in England, "so this is certainly still an area of uncertainty and active study. It may perhaps be that the air circulation reverses in the later stages of the hole's evolution."

Understanding these processes, Westbrook added, can "give us some insight into the basic science of how clouds work, how the microscopic processes of tiny ice crystals and droplets interact with the large-scale air motion which drives the clouds, and how the seeds of precipitation are sown."

Kenneth Sassen, of the University of Alaska Fairbanks, said the report adds detail to a phenomenon that has been noted before.

"This is an interesting effect of aircraft penetrating super-cooled water clouds, and illustrates the basic result when ice and super-cooled water get mixed together, but I doubt that in more than a handful of cases could airports, or the surrounding areas, experience any problems," said Sassen, who was not part of the research team.