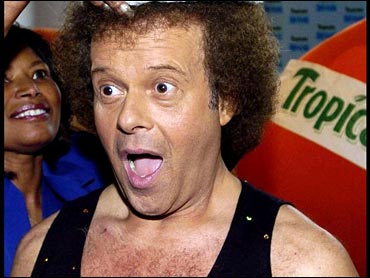 Exercise guru Richard Simmons was cited for misdemeanor assault Wednesday night for allegedly slapping an airport passenger who made a sarcastic remark about one of his exercise videos.

Simmons, known for his "Sweatin' to the Oldies" series of exercise videos set to songs from the 1950s and 60s, was awaiting a flight to Los Angeles out of Phoenix's Sky Harbor International Airport about 5 p.m. when police said a man recognized him at the terminal.

The man "made the off-hand comment, 'Hey everybody. It's Richard Simmons. Let's drop our bags and rock to the '50s,"' said Phoenix police Sgt. Tom Osborne. "Mr. Simmons took exception to it and walked over to the other passenger and apparently slapped him in the face."

Police have not released the name of the man who was allegedly slapped. They say he was not injured but told officers that he intends to file charges against Simmons.

Authorities say Simmons was cited for misdemeanor assault and was then allowed to board his flight.