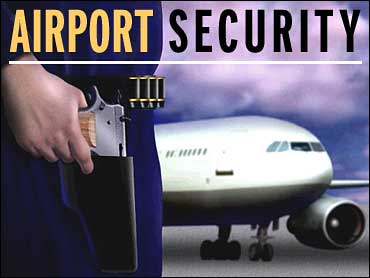 As the government met Tuesday's deadline for having federal employees handle security at the nation's airports, travelers praised the efficiency of the new system but said they suspected there still would be problems.

Bob Balzco of northwest Indiana, who was headed to Seattle from Chicago's O'Hare International Airport, said terrorists could still get through security posts.

"Look at El Al. A pen knife got on there. It's supposed to be the most secure airline," he said, referring to an incident on the Israeli airline over the weekend.

"We are proud we've met so many deadlines but on the other hand we are not resting," says Norman Minetta, the Secretary of Transportation.

They can't rest because another potentially more challenging deadline is just 42 days away.

That is when every U.S. airport must be ready to screen all checked baggage for explosives. The TSA says more than 400 of the nation's 429 airports will make it.

But some of the busiest - including Miami, Atlanta, and Dallas Ft. Worth - say they won't. And they want one-year extensions from Congress.

"If it takes us up to a year at a smaller number of airports to get to where we want to be, so be that as well," says Adm. James Loy of the TSA.

The problem? New scanning machines that are the size of minivans. Some airports even require renovations to house them. Locating them in existing check-in space could cause large disruptions.

"In our airport particularly, we are going to lose a large amount of passenger flow area," explains Mark Forare, Assistant Director of Security at Miami Airport.

But not every large airport is asking for more time. Those in New York don't want extensions.

But if the new scanning machines aren't in place, the other option is to check each piece of baggage by hand. But think about it, every bag screened by hand? The delays would be enormous.

"Considering the TSA is doing something new and they will be in the training phase and all of that will quite rightly cause some delay in the processing of the bags initially, I would consider chaos to be an appropriate word," Forare tells Axelrod.

As if there's not enough chaos already heading into the busiest travel season of the year, airport managers now warn of more.