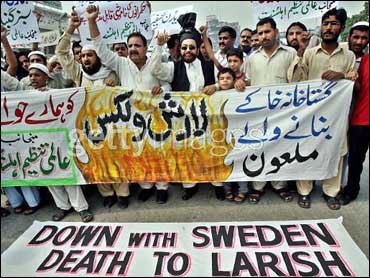 The leader of al Qaeda in Iraq offered money for the murder of a Swedish cartoonist who recently produced images deemed insulting to Islam and promised a new offensive in Iraq during the Muslim holy month of Ramadan, in a statement carried by Islamist Web sites Saturday.

In a half hour audio file entitled "They plotted yet God too was plotting," Abu Omar al-Baghdadi also named the other insurgent groups in Iraq that al Qaeda was fighting and promised new attacks, particular against the minority Yazidi sect.

"We are calling for the assassination of cartoonist Lars Vilks who dared insult our Prophet, peace be upon him, and we announce a reward during this generous month of Ramadan of $100,000 for the one who kills this criminal," the transcript on the Web site said.

Al-Baghdadi, who leads the al Qaeda front group the Islamic State in Iraq, also promised a new campaign of attacks dedicated to his predecessor during the Islamic holy month of Ramadan that has traditionally witnessed an increase in violence in the war torn country.

"I am honored to announce the invasion of the martyr Abu Musab al-Zarqawi at the beginning of Ramadan," he said.

The al Qaeda leader upped the reward for Vilks' death to $150,000 if he was "slaughtered like a lamb" and offered $50,000 for the head of the editor of Nerikes Allehanda, the Swedish paper that printed Vilks' cartoon of the Prophet Muhammad with a dog's body on Aug. 19.

Most of al-Baghdadi's message, however, focused on the situation in Iraq and he reserved special ire for the Muslim Brotherhood, the organization behind the country's largest Sunni political party, the Islamic Party in Iraq.

He accused the organization of working with U.S. forces to combat al Qaeda militants, especially in Diyala province, northeast of the capital Baghdad.

"Our honorable nation should recognize that the Muslim Brotherhood in Iraq, and the Islamic party at the top of it, are practicing today the most heinous campaign to erase the religion from Iraq," said al-Baghdadi.

He also criticized nationalist insurgent groups, such as the 1920 Revolution Brigades and Hamas of Iraq, accusing them of working with the Iraqi security forces.

The message confirms statements by U.S. commanders that not only are Iraqi tribes taking on al Qaeda, but also other insurgent groups that once fought coalition forces and the government, resulting in new successes in the struggle against the militant organization.

Al-Baghdadi also singled out Iraq's tiny Yazidi minority, followers of an ancient sect living in the north of the country that are considered devil-worshippers by extremist Muslims and were targeted last month by car bombs in the most devastating attack on civilians since the 2003 U.S.-led invasion.

Al Qaeda claimed responsibility for the attack, linking it to the stoning death of a young Yazidi woman who converted to Islam in an attempt to elope with a Muslim boyfriend.

"I swear to God either they hand in those who killed you or we will annihilate their greenery, uproot them and expel them from the land of Iraq," he said. "We will continue waging attacks against them until their great devil announces his acceptance and that he doesn't object to the conversion of any Yazidi to Islam"

For his part, the cartoonist Vilks said from Sweden that he believed the matter of his cartoons had been blown out of proportion.

"We have a real problem here," Vilks told The Associated Press over the telephone. "We can only hope that Muslims in Europe and in the Western world choose to distance themselves from this and support the idea of freedom of expression."

Ulf Johansson, editor-in-chief of Nerikes Allehanda, said he took the bounty "more seriously" than other threats he had received. "This is more explicit. It's not every day somebody puts a price on your head."

Johansson said he had contacted the police and that they had already started work on the threat.

Aside from a few scattered protests and condemnations by Muslim countries, the reaction to the cartoon has been muted, in contrast to the violent demonstrations accompanying similar images in a Danish paper last year.

In an attempt to defuse the tensions caused by the cartoon in both Sweden and abroad, Swedish Prime Minister Fredrik Reinfeldt last week invited 22 Sweden-based ambassadors from Muslim countries to talk about the sketch.

Reinfeldt expressed regret at the hurt it may have caused, but said that according to Swedish law it is not up to politicians to punish the free press.

Al-Baghdadi added in his message that if the "crusader state of Sweden" didn't apologize, his organization would also attack major companies.

"We know how to force you to retreat and apologize and if you don't, wait for us to strike the economy of your giant companies including Ericsson, Scania, Volvo, Ikea, and Electrolux," he said.

Al Qaeda in Iraq in the past has carried out operations in Jordan and may have links to militant groups in Lebanon, but is not known to have any kind of presence in Europe.