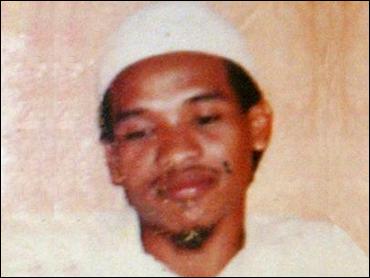 Indonesia has arrested the alleged operations chief of an al Qaeda-linked terror group blamed for bombings on the resort island of Bali, the nation's police chief said Wednesday.

The arrest of Mukhlas, alias Ali Gufron, was a major blow to Jemaah Islamiyah, which has been implicated in a string of terror plots against Western targets in Southeast Asia, officials said.

Mukhlas was taken into custody Tuesday near the central Javanese town of Solo, along with eight other people, including his wife, police chief Gen. Erwin Mapaseng told reporters.

"Ali Gufron, or Mukhlas, is an important figure in the group (Jemaah Islamiyah)," Sutadi said. "We have been looking for him for a long time."

Sutadi said one of those detained, identified only as Hermianto, was believed to have arranged accommodation for the bombers in Bali.

Last week, police said Mukhlas was believed to have replaced Riduan Isamuddin, also known as Hambali, as operations chief of Jemaah Islamiyah. They said that Hambali was becoming too well known and had been forced into hiding.

Hambali has been described as al Qaeda's point man in Southeast Asia.

Mukhlas has been identified as a brother of Amrozi, who was arrested last month in connection with the bombings. Amrozi confessed to owning the car used in the attack and buying materials for the bomb, officers said.

Police have not named Mukhlas as a suspect in the Bali blasts. However, regional intelligence officials say he was involved in planning the attacks.

Police have also arrested Imam Samudra, who they have identified as one of the masterminds of the attacks.

At least 28 people have been arrested in connection with the blasts. Police say Amrozi and Samudra are the only ones with a direct role. None have been charged.

Also detained is the alleged spiritual leader of Jemaah Islamiyah, Abu Bakar Bashir. He has not been named a suspect in the Bali bombings, but he was arrested after the attack, and was accused of masterminding a string of church bombings in 2000. Bashir denies involvement in those bombings and claims Jemaah Islamiyah does not even exist.

Indonesia's defense minister, Matori Abdul Jalil, has said Bashir's close ties with many of the Bali bombing suspects leads him to believe the cleric also was involved in that attack.