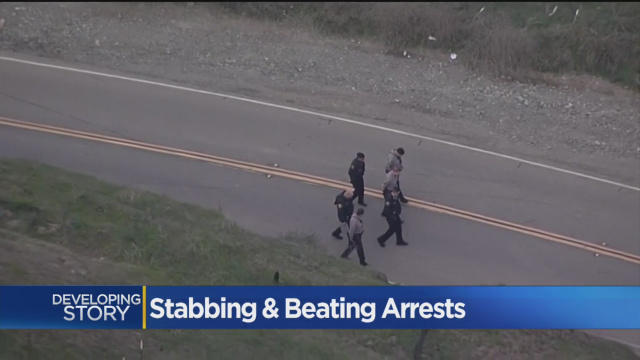 MODESTO , Calif. -- Two people are behind bars thanks to the dying words of a Tracy woman who was brutally beaten and stabbed in Alameda County. CBS Sacramento reports a driver found the 19-year-old victim early Monday morning on Tesla Road near Livermore.

"This victim really tried to survive," said Sgt. Ray Kelly, a spokesman for Alameda County Sheriff's Department. "She fought, and she fought. The last thing we believe she was able to do was to point us in the direction of the people who killed her."

The sheriff's department got the call just after 2 a.m. on Monday. A driver spotted a woman crawling on the ground on Tesla Road, a rural part of Alameda County.

"There's a female crawling on the road," the dispatcher said, in one of the first dispatch calls. "She is missing an arm, and she is bloody."

"Initially they thought the woman may have had a severed arm," Sgt. Kelly said. "That was ultimately not true. It appears she likely had her arm under her body as she was crawling."

The victim had been stabbed several times and beaten, but she still managed to crawl 100 yards back to the road. She was airlifted to Eden Medical Center in Castro Valley, where she died two hours later.

"We have a compelling dying declaration," Sgt. Kelly said.

Her final words were to police: the names of the people who attacked her. That led investigators with the Alameda County Sheriff's Department to a house on Nadine Avenue in Stanislaus County.

"We seen the sheriff pull up on the corner right here on the street and sat here until this afternoon when the raid happened," said neighbor Jami Marie Smith.

Around 1 p.m., deputies arrested a man and a woman at the house, both 19 years old.

"They were nice neighbors," said Bertha Andrade, who lives next door. "I never heard nothing bad!"

"When you have people that go out and do things like that, and they end up living in your neighborhood, it's not good," Smith said.

The suspects have been transported to Alameda County on suspicion of murder. Their names and the victim's name have not yet been released.