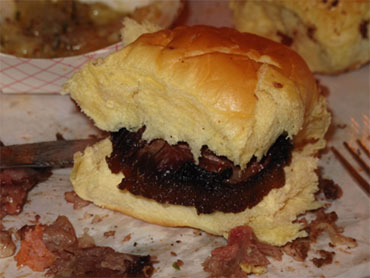 Alan King, whose tirades against everyday suburban life helped build a long comedy career in nightclubs and television that he later expanded to character acting on the silver screen, died Sunday at the age of 76.

King died at a Manhattan hospital, said a son, Robert King. He did not disclose the cause of death.

King, who enjoyed perhaps his greatest comic success in the 1950s, '60s and '70s, when he appeared on "The Ed Sullivan Show" 93 times, made a flawless transition to regular film work in the 1980s.

He played supporting roles in more than 20 films including "Bye Bye Braverman," "I, the Jury," "The Anderson Tapes," "Lovesick," "Bonfire of the Vanities," "Casino," and "Rush Hour 2."

He also produced several films, including "Memories of Me," "Wolfen," "Cattle Annie and Little Britches," and the 1997 television series "The College of Comedy With Alan King."

King also was the abbot of the New York Friars Club, and hosted its famous roasts, which had recently returned as a television staple on Comedy Central.

He said he was working strip joints and seedy nightclubs in the early 1950s when he had a revelation while watching a performance by another young comedian, Danny Thomas.

"Danny actually talked to his audience," he recalled in a 1991 interview. "And I realized I never talked to my audience. I talked at 'em, around 'em and over 'em, but not to 'em. I felt the response they had for him. I said to myself, 'This guy is doing something, and I better start d-ing it."'

King, who until then had been using worn out one-liners, found his new material at home. His wife had persuaded the New Yorker to forsake Manhattan for suburban Forest Hills, Queens, believing it would provide a better environment for their children.

Soon he was joking of seeing people moving from the city to the suburbs "in covered wagons, with mink stoles hanging out the back."

His rantings about suburbia, just as America was embracing it, struck a chord with the public, and soon he was appearing regularly on the Sullivan show, Garry Moore's variety show and "The Tonight Show."

Bookings poured in, and he toured with Tommy Dorsey's orchestra, played New York's showcase Paramount Theater and top nightclubs around the country.

He also worked as the opening act for such music stars as Lena Horne, Billy Eckstine, Patti Page and Judy Garland, taking part with the latter in a Command Performance in London for Queen Elizabeth.

King branched out, appearing in a handful of films in the late 1950s, including "The Girl He Left Behind," "Miracle in the Rain" and "Hit the Deck," although he didn't care for his roles.

"I was always the sergeant from Brooklyn named Kowalski," he once complained.

He also appeared on Broadway in "Guys and Dolls" and "The Impossible Years," and produced the Broadway plays "The Lion in Winter" and "Something Different."

Born Irwin Alan Kniberg to immigrant parents in New York City, King grew up on Manhattan's Lower East Side and in Brooklyn.

"Both of them were tough neighborhoods, but I was a pretty tough kid," he recalled in 1964. "I had an answer for everything. ... I fought back with humor."

He got into comedy in his teens, dropping out of high school to tour in a Major Bowes amateur troupe and going on to appear in Catskills hotels and burlesque houses.

In 1947 he married Jeannette Sprung, and they had three children, Robert, Andrew and Elaine Ray. When King was at the height of his career, he faced one son's drug addiction and said he realized he had neglected his family.

"It's not easy being a father," he said, "but I've been allowed a comeback."

He said he began spending more time at home, adding that his son conquered his addiction and his family changed.

"Now everyone kisses," he said. "We show our affections."