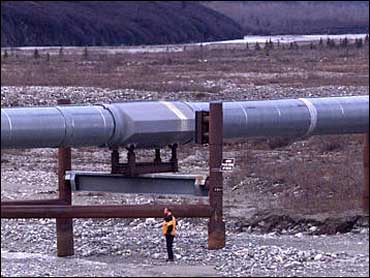 The pipeline, which carries crude oil from the North Slope oil fields, is expected to reopen at some point on Wednesday.

Employees of Alyeska Pipeline Service Co. and more than a dozen contractors have been working around the clock to get the pipeline back in operation, company spokesman Mike Heatwole said.

Temporary supports had been placed where regular supports were shaken loose as the pipeline was jolted sideways by up to 7 feet.

"I think it should be a note of real satisfaction for the people responsible for the maintenance of the pipeline that it did exactly what it's supposed to do in an earthquake," Gov. Tony Knowles said. "It bent but it did not break."

Production at North Slope wells was at just 3 percent of its normal rate Tuesday, but Paul Laird of BP Exploration (Alaska) Inc. said no wells would have to be shut down if the pipeline reopened early Wednesday.

The pipeline normally carries about a million barrels of oil to Valdez each day. That puts about $4 million a day into the state treasury when the oil is flowing.

Also Tuesday, state officials estimated the cost of repairing roads damaged by the earthquake at about $20 million.