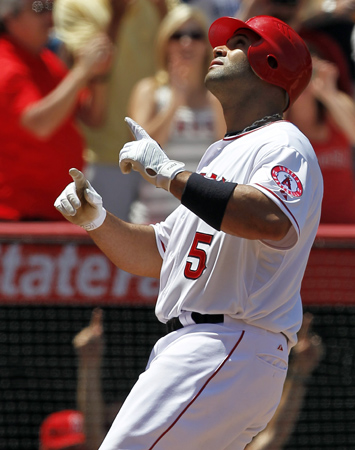 (AP) ANAHEIM, Calif. - That day off sure did Albert Pujols some good.

The $240 million slugger finally hit a home run for the Los Angeles Angels, ending the longest power drought of his career Sunday in a 4-3 win over the Toronto Blue Jays.

Pujols connected in the fifth inning for a two-run shot, his first AL homer and the 446th overall. He didn't play in Saturday night's victory after Angels manager Mike Scioscia kept him out of the lineup for the first time this season.

"I don't think anything's been lifted off my shoulders, man," said Pujols, who did not come out for a curtain call. "I don't think about what you guys write or what you think. I know what I'm capable of doing, and I come out here every day and try to get myself ready for the game and give 110 percent to this team and to this organization. And if I do that, there's nothing to be sorry about."

Pujols circled the bases without showing much emotion — same as he did so many times with the St. Louis Cardinals. But when he returned to the dugout, he had it all to himself. There was nobody home. No players, no coaches, no batboys.

Pujols' teammates gave him the ol' silent treatment, a plot hatched by Torii Hunter. They were all waiting for the slugger in the tunnel leading to the clubhouse. Then, a burst of euphoria and they were all back on the bench, high-fiving and slapping him all over his body.

"I thought that would be cool. I always wanted to do that, and it worked," Hunter said. "I just said: `Let's get off the bench and go to the tunnel.' He was excited about it and we were, too. We had to think fast. When I have a day off, man, I do stupid stuff."

Pujols had gone 33 games and 139 at-bats dating to last year without a home run in the regular season. The three-time NL MVP had a three-homer game for the Cardinals in the World Series and hit seven home runs in spring training.

Pujols drove a 2-2 pitch from rookie right-hander Drew Hutchison (1-1) into the left-field bullpen. Mike Trout doubled one out before the home run.

Pujols homered in his 28th game and 111th at-bat with the Angels, who signed him to a 10-year, $240 million contract as a free agent in December, touching off a frenzy that resulted in more than 5,000 extra season tickets being sold.

This was his first home run at Angel Stadium, the 31st big league ballpark in which he's hit one.

"The last three weeks here, the fans have wanted to see it, and I'm blessed that I got the opportunity to do it here in front of them," Pujols said with a trace of a grin. "They've been waiting and they've been impatient, and the last couple of days I heard some boos out there, but that's part of it. I touched on that the other day. If I could boo myself, I'd do it myself, too.

"But don't blame the fans. If you want to blame somebody, blame me because I'm a big guy and I can take it. I'm not performing the way everybody's expecting, but the season isn't only 27 games. You play 162 games, and they're going to cheer us more than they're going to boo us."

The home run drew a reaction far away, too. Several of his former St. Louis teammates were watching on television in the clubhouse after a win at Houston, and they clapped and cheered loudly when Pujols connected on Hutchison's slider.

"My slider was pretty effective today, other than the one I hung to him," Hutchison said. "I was trying to bounce it in the dirt and I didn't execute it. When you don't execute your pitches, things like that happen."

Pujols had not homered in the regular season since Sept. 22. He began the game batting .194 with five RBIs. His longest homer drought prior to this was in 2011, when he came up empty in 27 straight games and 105 at-bats.

Previously, his longest home run drought at the start of a season was in 2008, when he failed to hit one in his first eight games and 27 at-bats.

"Man, it's a relief for him and I'm pretty sure it's a relief for us," Hunter said. "We don't have to hear about Albert having a goose egg no more. I'm happy that he got this lifted off of him. Now he can go out there and just swing the bat and have fun."

Jerome Williams (3-1) allowed three runs and eight hits in 6 2-3 innings. The right-hander gave up an unearned run in the seventh after Pujols — a two-time Gold Glove winner — committed his first error of the season with a bad throw to second.

Angels lefty Scott Downs injured himself trying to avoid a line-drive single through the box by J.P. Arencibia with one out in the ninth and was replaced by LaTroy Hawkins.

Hawkins turned Omar Vizquel's line drive into a game-ending double play for his first save with the Angels.