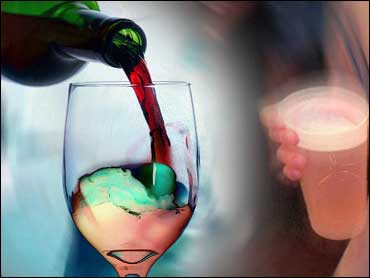 Social drinking seems to impair older people more than their younger drinking buddies. Also, older people are less likely to realize how the alcohol is affecting them, according to a new study.

For the study, some participants from each age group consumed a moderate amount of alcohol while others drank non-alcoholic placebo beverages. Participants took a test at 25 minutes and 75 minutes after drinking. The tests required them to connect letters and numbers in order with a line. It was designed to measure visual-motor coordination, planning, and the ability to move from one task to the next.

Participants also rated how intoxicated they felt and how much they thought the alcohol impaired their performance on the tests.

"That doesn't sound like much, but five seconds is a big difference if you're in a car and need to apply the brakes," researcher Sara Jo Nixon, a psychiatry professor at the University of Florida's McKnight Brain Institute, says in a news release. "It can mean the difference between a wreck, and not-a-wreck."

Nixon offers this advice: "If you have a couple of drinks at dinner, sit around, have dessert - don't drive for a while."

Alcohol consumption among older adults is likely to become a larger public health issue. More than half of adults over the age of 55 drink in social settings, according to background information in the study. Also, the percentage of the population that is older is projected to increase dramatically over the next couple of decades. By 2030, one-in-five U.S. residents will be over the age of 65.
By Caroline Wilbert
Reviewed by Louise Chang
©2005-2008 WebMD, LLC. All rights reserved