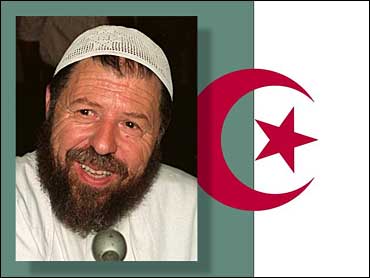 The two leaders of an outlawed Islamic party, which nearly rose to power in Algeria more than a decade ago, were freed Wednesday after serving 12 years in prison.

Abassi Madani and Ali Belhadj, who headed the Islamic Salvation Front, were banned from political activity as a condition of their release, an army statement carried by the official APS news agency said.

The Islamic Salvation Front, a fledgling fundamentalist party that had promised to deliver solutions where military-backed leaders had failed, was poised to win the 1992 parliamentary election.

Madani, 72, and Belhadj, 47, were arrested in 1991 after the party led a general strike that all but paralyzed the military-backed authorities in charge since Algeria's independence from France in 1962. They were convicted of attacking the security of the state and sentenced to 12-year prison terms in July 1992. The year served before their conviction counted as one of the 12.

Considered the Front's strategist, Madani, lived under house arrest for the past six years, after serving six years in prison.

Belhadj, the group's fiery orator, was held in Blida military prison, 40 miles south of Algiers. Crowds pushed and shoved to see him as he went to pray at the mosque in Kouba, an Algiers suburb where he lives, after his 6:30 a.m. release.

Belhadj then went to the home of Madani, in Algiers, for a half-hour visit. There was no immediate comment from the two men.

Their release came during a period of relative calm in the insurgency, which has left 120,000 civilians, security forces and Islamic insurgents dead.

Backers of the banned Islamic Salvation Front and human rights activists have long demanded the release of Madani and Belhadj.

But citizens and groups representing victims of violence expressed outrage at the idea that the No. 1 and No. 2 Muslim fundamentalist leaders were freed. They fear the release of the two will embolden followers of the banned party.

"They want him (Belhadj) to come out like a newborn. We will be there to remind him that he is an assassin and will remain so," said Cherifa Kheddar, head of Djazairouna (Our Algeria), a group representing victims of the violence who demonstrated in front of the Blida prison.

There has been speculation over the years that Madani and Belhadj would benefit from an early release from prison as a means of quelling the insurgency.

But President Abdelaziz Bouteflika has made clear the Front will never be reactivated as a political party, saying the issue was "politically closed."

The Front was created in 1989 with a constitutional change allowing for a multiparty system. It quickly rose in popularity, sweeping municipal elections the following year. Other leaders have been killed or are in exile in Europe.