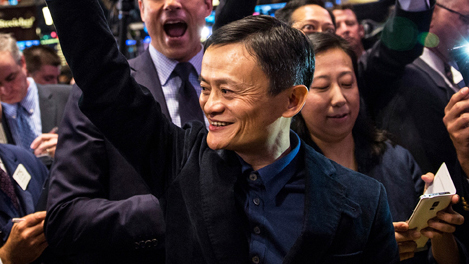 "I hope we can do something together," Ma said at the Wall Street Journal Live technology conference here Tuesday. "As always a good marriage needs both sides [working together.] I respect Apple and I respect Tim very much. I think he's doing a very fantastic job."

Alibaba, the Chinese e-commerce provider which last month raised the largest initial public offering in the US at $25 billion, built a payments service called Alipay that Ma says now boasts 300 million users. Apple this month launched Apple Pay, which lets iPhone users tap to pay for goods and services at retail stores and buy goods within an app. Cook, who followed Ma on stage here, said the company activated more than 1 million accounts in the first 72 hours.

Cook said he plans to meet with Ma later this week, but didn't say how the two companies might work together. "We like to partner with people that are wicked smart, with flexible teams that are product-based that push us," Cook said. "I think Jack has a company that's exactly like that. If we can find some areas of common space, I love it. I love partnering with people like that."

Established in 1999, Alibaba has become a leader in e-commerce with a growth rate trumping its better-known US competitors. The company's revenue rose 66 percent in its fourth quarter of 2013. In contrast, Amazon's revenue rose 22 percent, while eBay's climbed 14 percent.

When asked whether he was interested in a partnership with eBay or its PayPal payment service -- which will be spun out into a separate company next year -- Ma basically said no. "I have my Alipay."

But he wasn't reluctant to talk about his ambitions for Alibaba in the US. "I think the opportunities for e-commerce here [are] great," Ma said. "Amazon, eBay -- you need more."

In a 30-minute question-and-answer session, Ma, a former schoolteacher who built an empire around helping small businesses bring their goods to market and giving shoppers a finance mechanism with Alipay to allow them to shop online, said he's visiting Hollywood studios. He considers Alibaba, with more than 100 million visitors, the world's largest entertainment company since 80 million people peruse its content each day without buying anything.

China "will be the largest movie market in the world," said Ma, and that will create an opportunity to bring new kinds of content to the market. In July, Alibaba signed a deal to bring the "Twilight" teen vampire movie series and the TV show "Mad Men" to its set-top boxes.

Ma, who called out 1994's "Forrest Gump" as his favorite film, said he'd also like to change the type of storytelling that Chinese audiences have become accustomed to, since movies can change people's thinking. "In China, all the movie heroes must die. If the heroes dies, nobody wants to be the heroes," he joked. "I have never seen a movie in China where the hero survived."