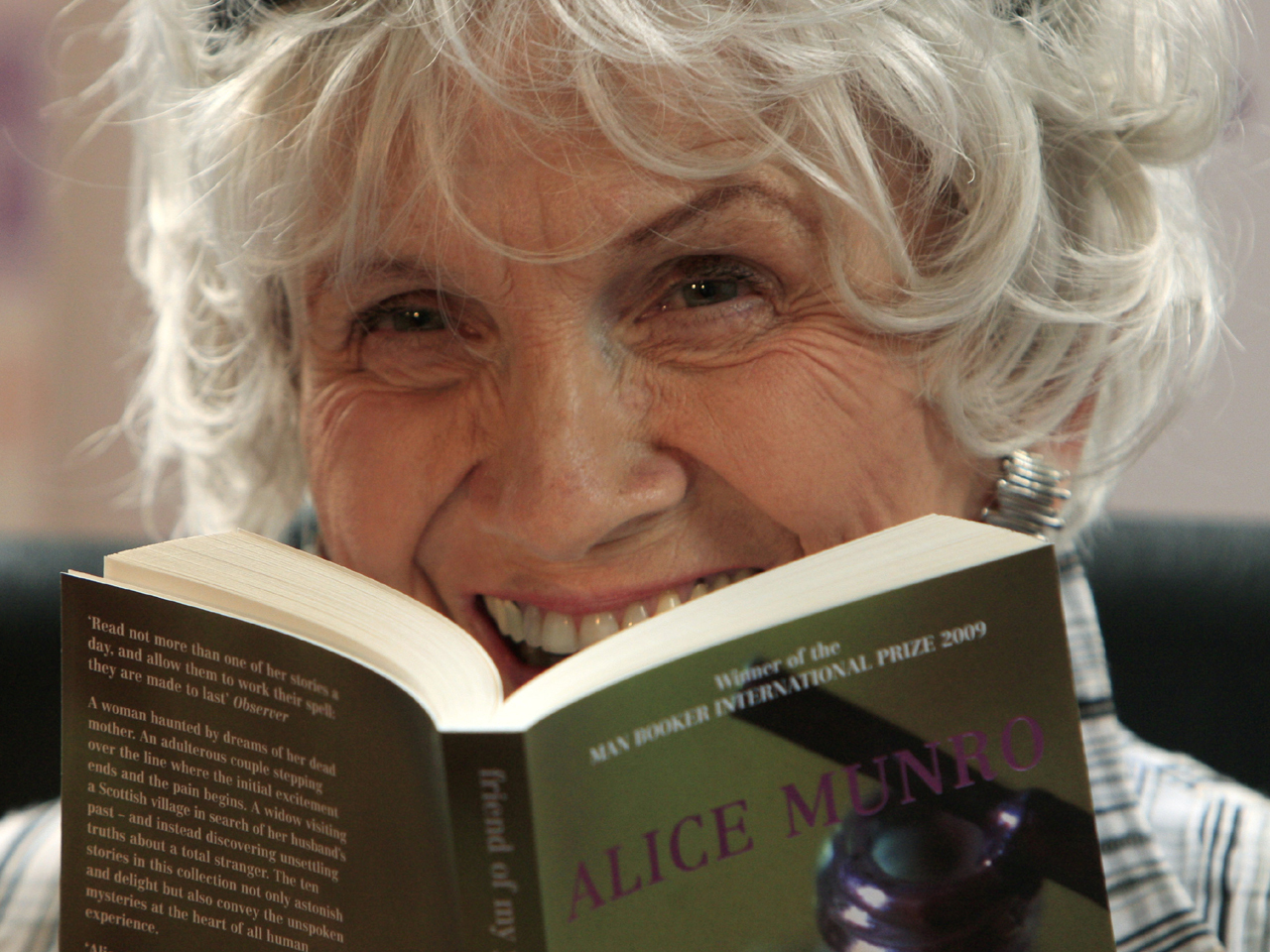 STOCKHOLM Alice Munro, a Canadian master of the short story revered as a thorough but forgiving chronicler of the human spirit, won the Nobel Prize in literature on Thursday.

Munro is the first Canadian writer to receive the prestigious $1.2 million award from the Swedish Academy since Saul Bellow, who left for the U.S. as a boy and won in 1976.

Seen as a contemporary Chekhov for her warmth, insight and compassion, she has captured a wide range of lives and personalities without passing judgment on her characters. Unusually for Nobel winners, Munro's work consists almost entirely of short stories. "Lives of Girls and Women" is her only novel.

"I knew I was in the running, yes, but I never thought I would win," the 82-year-old said by telephone when contacted by The Canadian Press in Victoria, British Columbia.

Munro is beloved among her peers, from Lorrie Moore and George Saunders to Margaret Atwood and Jonathan Franzen. She is equally admired by critics. She won a National Book Critics Circle prize for "Hateship, Friendship, Courtship, Loveship, Marriage," and is a three-time winner of the Governor General's prize, Canada's highest literary honor.

Munro's publisher, Penguin Random House, welcomed the award with "jubilation and great pride," and sent "joyous good wishes to our beloved author and to our family of her publishers and editors." Canadian Prime Minister Stephen Harper congratulated Munro on Twitter "on behalf of all Canadians."

The award is likely to be the capstone to Munro's career. She told Canada's National Post in June that she was "probably not going to write anymore."

In announcing the Nobel Prize, the Swedish Academy called her a "master of the contemporary short story." The academy's permanent secretary, Peter Englund, said he had not managed to get hold of her but left a message on her answering machine.

"She has taken an art form, the short story, which has tended to come a little bit in the shadow behind the novel, and she has cultivated it almost to perfection," Englund told The Associated Press

Munro is the 13th female literature laureate in the 112-year history of the Nobel Prizes.

Her published work often turns on the difference between Munro's youth in Wingham, a conservative Canadian town west of Toronto, and her life after the social revolution of the 1960s.

It was "because, having been born in 1931, I was a little old, but not too old, and women like me after a couple of years were wearing miniskirts and prancing around," she said.

Munro, the daughter of a fox farmer and a teacher, was born Alice Anne Laidlaw. She was a literary person in a nonliterary town, concealing her ambition like a forbidden passion.

"It was glory I was after ... walking the streets like an exile or a spy," recalls the narrator of Munro's "Lives of Girls and Women," a novel published in 1971.

She received a scholarship to study at the University of Western Ontario, majoring in journalism, and was still an undergraduate when she sold a story to CBC radio in Canada.

She dropped out of college to marry a fellow student, James Munro, had three children and became a full-time housewife. By her early 30s, she was so frightened and depressed she could barely write a full sentence.

Her good fortune was to open a bookstore with her husband, in 1963. Stimulated by everything from the conversation of adults to simply filling out invoices, her narrative talents resurfaced but her marriage collapsed. Her first collection, "Dance of the Happy Shades," came out in 1968 and won the Governor's prize.

Her stories are usually set in Ontario, her home province. Among her best known is "The Bear Came Over the Mountain," the story of a woman who begins losing her memory and agrees with her husband that she should be placed in a nursing home.

The narrative begins in a relatively tender, traditional mood. But we soon learn that the husband has been unfaithful in the past and didn't always regret it - "What he felt was mainly a gigantic increase in well-being." The wife, meanwhile, has fallen for a man at the nursing home.

Some have called her "the greatest author in North America and, yes, I tend to agree with that," said the academy's Englund. "We're not saying just that she can say a lot in just 20 pages - more than an average novel writer can - but also that she can cover ground. She can have a single short story that covers decades and it works."

The 2013 Nobel announcements continue Friday with the Nobel Peace Prize, followed by the economics prize on Monday. The awards will be handed to the winners on Dec. 10, the anniversary of prize founder Alfred Nobel's death in 1896.