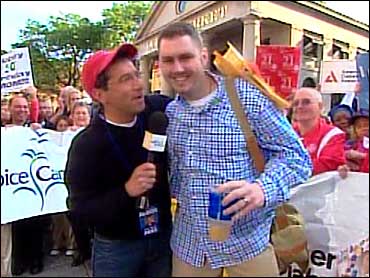 The Early Show kicks off our exclusive "Dave Price: All-Access Pass" series, where lucky viewers get the chance to team up with Dave Price for an unforgettable weekend adventure.

On Friday, Sept. 8, live from Boston's Faneuil Hall Marketplace, Price announced the first of eight people who will be whisked from the crowd in cities across the U.S. and taken on an "All-Access" weekend adventure.

Stephen J. Blinn visited CBSNews.com to write to The Early Show about his fantasy adventure — a trip to London.

"Since it's just a weekend, I'd love to go to London and see the museums," he told Price, after hearing his name announced as the recipient of an all-access, behind-the-scenes whirlwind weekend with Price.

Price promises Blinn will get to do things most tourists don't get to and see London like no one else.

They will fly from Boston to London on Virgin Atlantic Airways. By videotape, Sir Richard Branson, the airline's owner, offered his congratulations and said during their visit, Blinn and Price would experience "our version of a London tea party."

On Tuesday, Sept. 12, watch highlights of their trip on The Early Show — and for a chance to enter a sweepstakes for an ultimate "All-Access Pass."

What's your ultimate adventure? Tell us and you could be whisked away on an "All-Access" weekend with Dave Price, too. Click here for details.