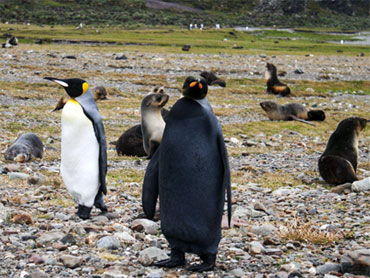 How big is a zillion? It's "an extremely large, indeterminate number," according to Dictionary.com.

And how rare is an all-black penguin, rather than the black-and-white tuxedo-like colorings on most of the adorable, big, wabbly birds?

It's a one-in-a-zillion mutation, scientists say.

On a recent trip for National Geographic Traveler magazine to the continent that is the world's southern tip -- Antarctica -- Contributing Editor Andrew Evans spotted one and got pictures and video of it.

He was doing a story on getting there from Washington, D.C. mostly by bus.

Evans saw the penguin on the island of South Georgia, just off Antarctica, during the trip's last leg - a boat ride from Venezuela.

Group members disembarked on South Georgia when they saw the penguin.

The birds have no natural fear of humans, so Evans sat on the ground in front of the penguin when he captured it on camera. Other naturalists on the ship said the bird had been spotted on other trips, which means it's been around awhile.

From what Evans could see, the black penguin assimilated well with the others, and even appeared to have a black-and-white mate.

There are some partially-black penguins, about one in every quarter million, scientists say. But this is the only one known to exist that is all black.