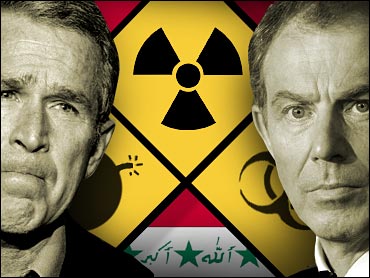 President Bush and British Prime Minister Tony Blair emphatically defended their decision to go to war with Iraq on Thursday, dismissing criticism that no weapons of mass destruction have yet been found.

"As long as I hold this office I will never risk the lives of American citizens by assuming the good will of dangerous enemies," Mr. Bush said at a White House news conference with Blair at his side.

Less than an hour earlier, in a speech to Congress, Blair suggested that history will forgive the toppling of Saddam Hussein's government even if it turns out that he and President Bush were wrong about Iraqi weapons of mass destruction.

But to have hesitated "in the face of this menace when we should have given leadership ... that is something that history will not forgive," Blair said.

"We are allies and we are friends," concurred Blair.

The two men fielded questions from reporters near the end of Blair's seven-hour trip to Washington.

He visited at a time when he and the president are both shadowed by controversy stemming from their pre-war claims that Saddam was seeking nuclear material from Africa.

Bush administration officials have struggled in recent days to explain the decision to include a line in the president's State of the Union address last winter – a reference citing British intelligence that some CIA officials believed to be inaccurate.

The president has tried to pin the blame for the misstatement on the CIA, but CBS News has learned the White House was pushing hard to find a way to put knowingly suspect information in the speech.

In what amounted to a telephone negotiation, a top NSC official, Robert Joseph, told CIA analyst Alan Foley he wanted cite-specific quantities and locations of uranium in the State of the Union. Foley told Joseph that intelligence, which was similar to statements removed from a previous presidential address, shouldn't be used. Joseph, sources say, explained that wouldn't leave much and asked if they could quote from the British report. Foley said that, too, was suspect, but he did finally agree it would be "technically" correct if the NSC laid the claim off on the Brits.

CIA Director George Tenet, though, was not made aware of the discussion, didn't read a draft of the State of the Union and never saw it delivered – he was home asleep at the time.

The president added that American and British intelligence "made a clear and compelling case that Saddam Hussein was a threat to security and peace."

"I strongly believe he was trying to reconstitute his nuclear weapons program," Mr. Bush said, adding that after the first Persian Gulf War in 1991, "it became clear that Saddam Hussein was much closer to developing nuclear weapons than anybody ever imagined."

Earlier, Blair became the first British prime minister to address a joint meeting of Congress since Margaret Thatcher in 1985.

The prime minister wryly thanked his audience for a "warm and generous welcome that's more than I deserve," and, in a reference to his political troubles at home, added, "it's more than I'm used to, quite frankly."

Blair's speech also touched on the war on terrorism, the Middle East peace process, the need to eradicate poverty, disease and famine in Africa and the need to promote free trade.

"This terrorism will not be defeated without peace in the Middle East between Israel and Palesitne," he said.

In what appeared to be mild criticism of the Bush administration, Blair also said it was important to act in coalitions, not going it alone. "Let us start preferring a coalition and acting alone if we have to, not the other way around," he said.

And he called on lawmakers not to continue to bear grudges against European countries who opposed the war.

"They are our allies. And yours. So don't give up on Europe," he said.

"When we invade Afghanistan or Iraq, our responsibility does not end with military victory," Blair said. "Finishing the fighting is not finishing the job. We promised Iraq democratic government. We will deliver it.

"We promised them the chance to use their oil wells to build prosperity for all their citizens, not a corrupt elite. We will stay with these people so in need of help until the job is done."

"I believe with every fiber of instinct and conviction I have that we are" right in deciding to go to war without broad international support, Blair said.

The prime minister was also under pressure to raise the issue of two British terror suspects who are being held by the U.S. at the Guantanamo Bay naval base in Cuba.

Blair announced Friday that the U.S. has agreed to suspend legal proceedings against the suspects until U.S. and British officials have discussed their cases.