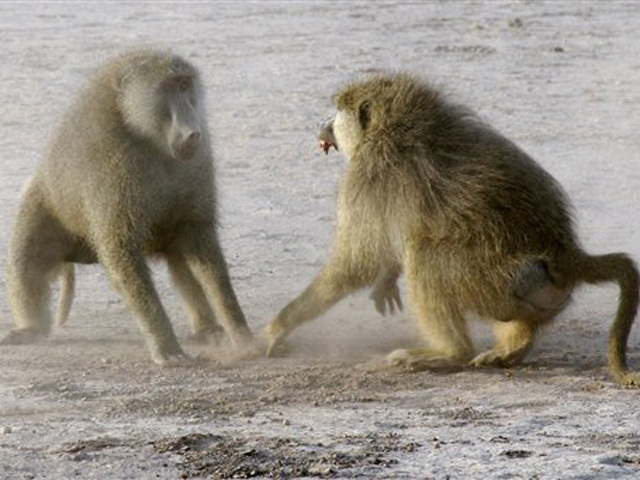 WASHINGTON - Life is tough for the top baboon.

Oh sure, you're No. 1 so you get the best food and girl baboons. But there's also all that pressure to defend your status.

Maybe, a new study suggests, being No. 2 is better - offering similar opportunities with less stress. At least among baboons. Laurence R. Gesquiere of Princeton University, and colleagues, studied wild baboons in Africa over a period of nine years and found the top-ranked alpha males had the highest levels of both sex hormones and stress hormones.

The beta males, the next ones down in the baboon hierarchy, had similar opportunities to get food and get together with females, the researchers found. But while the beta males had levels of sex hormones similar to the alphas, their stress hormones were markedly less than the alphas, they report in Friday's edition of the journal Science.

So, given that baboons are primates related to humans, what does this tell us about people?

Not much, says Robert M. Sapolsky, a stress expert and biology professor at Stanford University, who called the comparison sheer speculation at this point.

"A baboon troop is not a corporation with an executive - alpha male or otherwise - making decisions," said Sapolsky, who was not part of the research team. Gesquiere said that when high status comes with both high costs and benefits, including physiological stress in human or nonhuman groups, the result may either be a less time in the high status position or cumulative "wear and tear" that affects long-term health. Detailed studies of status-specific costs and benefits are important tasks for the future, she said.

An earlier theory called "executive stress syndrome has been shown to have been flawed, and baboon societies do not provide a basis to resurrect it," she added.

That theory was based on monkeys who developed ulcers when put in stressful decision-making conditions but, Sapolsky noted, it was flawed because the "executive" monkeys were chosen for being more emotionally reactive.

In addition, while that theory was based on psychological stress, Gesquiere and colleagues attributed the extra stress in the baboons to energy use in defending their position and mating. Since human executives normally do not have to actually engage in physical fights to keep their position, and they do not have to undergo periods of starvation guarding their females, "I do not see any reason why we should be more sympathetic to them, if anything, then the contrary!" commented Tobias Dreschner of the Max Planck Institute for Evolutionary Anthropology in Leipzig, Germany.

"One general pattern that one can find across a wide number of studies is that stress-related diseases are much more common in humans with lower incomes. This indicates that it is the lack of control that has a serious impact on human stress levels and that the ones on the bottom of the ladder are suffering the most," Dreschner said.

Big difference between No.1 and No.2

What stands out in the new study is the unexpected difference between the alpha and beta male baboons, Sapolsky said. Emily H. DuVal, a professor of ecology and evolution at Florida State University, agreed.

"I find it especially interesting that the beta males are apparently buffered from factors causing increased" stress levels, she said.

While the second-ranked betas also mate and fight for status, though not as often as the top males, levels of stress hormones are even lower than those of the relative losers much lower in the dominance rank, that are unlikely to have access to mates, noted DuVal, who was not part of the research team.

The study measured hormone levels in the feces of the baboons, tested at times when the hierarchy was stable and when it was unstable. Unstable conditions were defined as times when there was a turnover in baboon rankings.

Sapolsky was critical of that definition, suggesting that it would have been better to compare stable times with times when there were more challenges to those on top, not just when the challenge succeeded and a new alpha took over.

A rough equivalent, he said, would be hearing news at work that a bunch of people are going to be laid off at the end of the month, versus being one of those laid off. "When does blood pressure go up? What studies have shown is that the rise doesn't occur when being laid off - it occurs when the possibility first comes up. Changing rank is getting laid off. Challenges to rank are rumors that you may be next."

Gesquiere responded that, "while we were not able to evaluate the effect of those unsuccessful challenges on male stress hormone levels due to the rare occurrence of those events, we did compare the rate of challenges alpha and beta males received and we didn't find a difference."