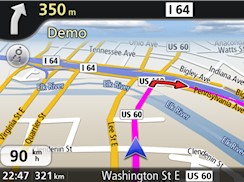 (MoneyWatch) If you've picked up a shiny new iPhone 5, or you installed the iOS 6 update to your existing iPhone, you might have noticed that Apple's usually flawless execution is marred by a very problematic new app: Maps. Apple parted company with Google, which had traditionally provided the mapping service for previous versions of iOS. And, as many users are finding out, that might have been a little premature for the half-baked Apple mapping app.

Users are complaining about a bevy of issues with the new map app. Balancing the new Siri-powered turn by turn directions, we've lost street view as well as walking and transit directions. And there are many frustrations, like bad map data, poor directions, and weird visual glitches. Bottom line: Apple's map software is not nearly as polished or mature as Google's offering, which isn't surprising since the search company has been refining Google Maps for over a decade.

But that's okay, since there are alternatives available. Indeed, many users gave up on the Google-powered Maps app years ago and installed better map alternatives that delivered turn-by-turn directions with voice and automatic re-routing, and they still work.

Navfree GPS Live is a great alternative because it does all the stuff a modern GPS navigation system should do, and it does it for free. The app provides multiple ways to search for a destination, an attractive interface and excellent navigation. You will have to contend with banner ads, but the app doesn't cost anything to install or to use.

Waze Social GPS is another free mapping app, but this one relies in part on social media to update its mapping database. Waze "crowdsources" traffic and road construction alerts, for example, as well as speed traps road hazards. The map also calls out gas stations and highlights the cheapest gas on your route. That's very handy.

I also really like MotionX GPS Drive. It's not free -- it costs 99 cents and you only pay for the voice navigation when you need it ($3 for a month or $10 for an entire year). That makes it a superb option for navigation when you only need it occasionally, such as for a business trip. The app has some excellent features, including the ability to see the local speed limit, predictive live traffic and a parking spot marker.