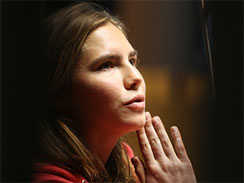 The brutal murder of a British college student in Italy by American Amanda Knox and her former Italian boyfriend was not premeditated, the judges who convicted them said in a document released Thursday.

Instead, the killing occurred spontaneously after what began as a sexual assault on Meredith Kercher, a 21-year-old Briton, the judges said.

In fact, Knox - Kercher's roommate - and Raffaele Sollecito had felt no resentment toward the victim. After the murder, they showed a "sort of repentance" for their crime when they covered Kercher's naked dead body with a duvet.

The judges also said they found no holes or inconsistencies in the prosecution's case against Knox and Sollecito, largely supporting forensic evidence that had been disputed by defense lawyers. Therefore, the guilty murder verdict was a "necessary and strictly consequential outcome" of the trial, the document said.

Knox and Sollecito were convicted in December by a court in Perugia, the central Italian town where the slaying took place in 2007. The Seattle woman was sentenced to 26 years in jail, while Sollecito received a 25-year sentence. The two, who were dating at the time of the killing, have insisted they are innocent.

They remain in jail.

On Thursday, the judges released the reasons behind their ruling in a 427-page document that reconstructed the night of the murder and detailed evidence and testimony heard during the roughly year-long trial. Once the document - required in Italian trials - is released, defense lawyers can launch their planned appeals.

Kercher's body was found in a pool of blood on Nov. 2, 2007, in the apartment she shared with Knox. The judges said she was murdered the night before by Knox, Sollecito and another man, Rudy Hermann Guede, an Ivory Coast citizen who also has been convicted of murder in a separate trial. Guede sexually assaulted Kercher with the help of Sollecito and Knox, the document said.

The judges said the murder was carried out due to "merely random circumstances": Knox and Sollecito were free that evening, they "ran into" Guede in town and they "found themselves" at the house where Kercher happened to be alone.

"The murder therefore came to be carried out without any planning, without any animosity or rancorous feelings toward the victim," the document read.

But despite the lack of any premeditation, the document said, Knox and Sollecito assisted Guede's sexual desire for Kercher, becoming her brutal assailants together with the Ivorian man and ultimately killing the 21-year-old from England when she resisted the sexual approach.

The pair might have found Guede's sexual drive toward Kercher "exciting" or might have been under the influence of drugs, the document said.

Knox, now 22, has said that she and Sollecito, 25, smoked pot the night of the murder. However, she maintains she spent the night at Sollecito's house and was shocked and saddened to learn of her roommate's slaying the following morning.

David Marriott, a spokesman for the Knox family, said in an e-mailed statement to The Associated Press that "Amanda's lawyers are currently reviewing the over 400 pages of the motivations and will be discussing with the family as soon as their review is completed."

Luca Maori, one of Sollecito's lawyers, said he will reject the ruling "point by point," according to the ANSA news agency.