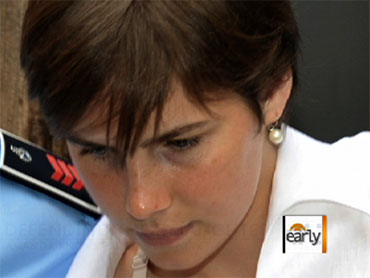 This morning, convicted killer Amanda Knox learned she'll face slander charges in an Italian court for claiming she was beaten by police when questioned about her roommate's death in 2007.

From Perugia, Italy, CBS News correspondent Allen Pizzey reported the American student faces the prospect of six years being added to the 26 years in prison she's currently serving for murder.

Denied bail, the 23-year-old has already served three years. Knox was convicted in Italy last December in the November 2007 killing of 21-year-old British roommate Meredith Kercher. Her former boyfriend, Raffaele Sollecito, who was also convicted, and got 25 years. Prosecutors say the two slit Kercher's throat after she refused to take part in a sex game.

The slander charges, Pizzey reported on "The Early Show," relate to allegations Knox made during her trial -- that police hit her over the course of a nine-hour investigation.

Knox burst into tears in court today and said she simply made use of what she called her right to a defense against an unjust accusation, and did not want to offend anyone.

Knox's initial testimony about the interrogation was backed up with a graphic demonstration.

Knox told the court in Italian at that time, "'Come on, come on. Remember. Remember."' She then demonstrated a violent blow to the back of her head.

Pizzey added that, during that interrogation, Knox made a confession that was a major element in the prosecution's case.

Knox's parents, Curt Knox and Edda Mellas, also face slander charges in Italy after they, too, claimed Amanda had been mistreated.

On "The Early Show" Monday, Mellas said she isn't surprised by the slander indictment.

"I'm disappointed," she said. "But these are the same people that, you know, all ruled against Amanda initially so we didn't think that they were going to change their mind."

Edda said it's been hard to be upbeat.

She said, "We were all optimistic at the beginning that she wouldn't be convicted without any evidence. But, I mean, I think we're all starting to get a little more hopeful because we have such a strong case for appeal, there is, you know, there's nothing that connects her to that crime and now we have a judge who might actually listen. So, we're keeping our fingers crossed that it goes correctly."

Pizzey added the new trial, set to start Nov. 24, will have a new judge -- one with a reputation of not being afraid to go against the judicial grain -- a prospect that could be a glimmer of good news for Knox and her family.

Also, Knox's lawyers submitted a five-page document requesting, among other things, the review of forensic evidence, including DNA samples they claim were tainted and mishandled beyond usability and the calling of witnesses.

Knox's lawyers and defense team say they are confident they'll win the appeal.

On "The Early Show" Monday, Curt Knox said he's thankful for the new judge and opportunity for fairness. He said, "It gives us that much more optimism to get a real conclusion and have an opportunity to bring Amanda home."

"Early Show" co-anchor Maggie Rodriguez added Knox's attorney told CBS News this weekend there is a greater opportunity to reverse her conviction because the appeals process scope is broader than in the U.S.

But how does Amanda Knox view her case?

"This is going to be her chance, once again, to have this wrongful conviction overturned and, you know, she's looking forward to that. So, we are, as well," he said.

But according to her mother, Amanda Knox does have her doubts.

"How can she not have fears?" Edda Mellas told Rodriguez. "There was a mistake made at the beginning. You know, she's innocent and she's locked up in a jail. So, there's those fears. But we got to move on and hope that they get it right this time."

But apparently Knox has been keeping herself busy in prison. Rodriguez pointed out she cooks chocolate cake and reads, and -- as the public learned last week -- also paints.

In fact, Rodriguez said, her paintings have come under considerable scrutiny, with some some saying her paintings of hands and female figures reveal the inner thoughts of a killer.

He said, "Amanda draws and has drawn for years, and this is just a way of passing the time and for people to critique and try to make a judgment on her character based on some pictures is ridiculous."

Edda Mellas added, "Actually, you know, it was just one person that said anything negative. A huge other number of people, including artists, have contacted us and told us her drawings are beautiful and don't reveal anything. She's just, you know, she's an artist."

But has the time in prison changed Amanda Knox?

Knox's step-father told CBS News she has matured during her time in jail and become more of an adult.

Pizzey explained Knox's appeal process is separate from the slander charge. However, her family sees a crucial connection.

Chris Mellas said, "Because, it is the root cause of it, really, this is where the beginning of all the errors started."