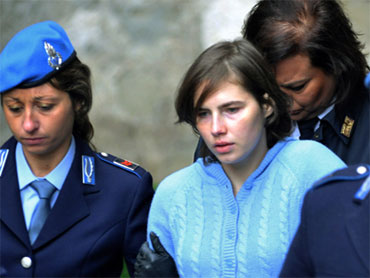 The hearing that was billed as "Amanda Knox's last chance" lasted a mere fifteen minutes.

The defense asked for a postponement until Dec. 11, so "the trial could begin in an atmosphere of tranquility and serenity," and the prosecution agreed.

Wearing a pale blue sweater against the damp autumn chill in Perugia, the 23-year-old Seattle student looked composed but serious as she returned to the same courtroom where she was sentenced to 26 years for murder last December.

She and her former boyfriend, Rafaelle Sollecito, who looked distant when he arrived in court, sat on the same bench where they spent their previous trial, rather than in the cages where convicted murderers are usually held.

The big difference this time is a new judge - one who has a record of overturning convictions and going against the judicial mainstream.

And there's a new jury, composed of five women and one man, who by law must have a higher level of education than the original jurors. In Italy that means at least a high school diploma. That matters, because when the appeal finally does get underway, Knox's lawyers will dispute complex forensic evidence, claiming it was contaminated and misread.

They will also contest the prosecution's version of motive, conjecture that Knox and Sollecito sexually assaulted and killed British student Meredith Kercher in a drug fueled sex game.

The defense team, which many observers say fell well short of putting up a proper fight during the trial, has been bolstered by advice from an American attorney.

Knox has now spent more than three years in jail, most of it sharing a 129-square-foot cell with others. Her current cellmate is believed to be a Moldovan woman in jail for stabbing her wealthy former husband to death.

But Knox is concentrating on her day in court.

"She's happy that things are at least starting to move again," her stepfather Chris Mellas said. "She's looking forward to the appeal. She understands that we have a very strong case for her."

But it's still a gamble.

"Italian law is different than American law," says CBS Legal Consultant Lisa Bloom. "On appeal, if you lose in Italy, you can get a harsher sentence than you received in the court below. Amanda Knox is taking that risk."

The defense is aiming for an acquittal, the prosecution wants the 26 year sentence changed to life.

"We believe that, you know, this appeal will actually bring the truth out and get this over - this wrongful conviction overturned," the student's stepmother Edda Mellas told CBS' "The Early Show" on Wednesday from Seattle. "It's worth it because we don't believe it could go any other way than to an acquittal."

Knox is "trying not to get her hopes up, but she's ready to fight," according to her close friend Madison Paxton, who has moved to Perugia to offer support.

An Italian journalist, meanwhile, has come out in defence of Knox and Sollecito.

Maria d'Elia says her just-published book, "The Other Truth on the Perugia Murder," refutes some of the main points in the prosecution's case.

"I try to explain that there is no evidence of Amanda and Rafaelle's guilt," she tells CBS News," the importance for the court to review all evidence... and to hear new witnesses."

The next hearing is set for Dec. 11, with another a week later, followed by another and in January.