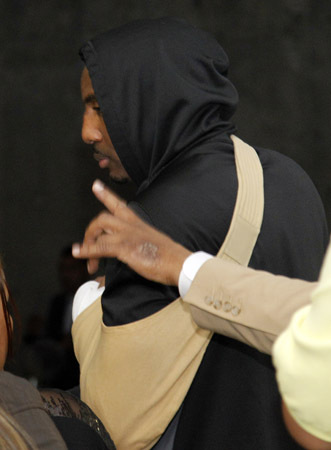 Stoudemire left the building with his arm in a sling and what appeared to be a bulky wrap over his left hand.

The specifics of what Stoudemire did immediately after Game 2 were unclear. But CBSSports.com's Ken Berger reported that paramedics rushed into the Knicks locker room after the game to attend to Stoudemire after he punched a fire extinguisher case outside the arena's tunnel entrance to the locker room just "seconds" after he left the court following the loss. Witnesses to the incident reported that there was "a lot of blood."

The player took to Twitter to apologize after the Knicks left the arena.

LeBron James finished with 19 points, nine assists and seven rebounds for the Heat, who lead the Eastern Conference first-round series 2-0.

Carmelo Anthony scored 30 points on 12-for-26 shooting for New York, which got 18 points from Stoudemire and 13 apiece from Tyson Chandler and J.R. Smith. The only other team to lose 12 straight playoff games is the Memphis Grizzlies, who dropped their first dozen postseason contests from 2004 through 2006.

New York's last postseason win came April 29, 2001. The Knicks get another chance to snap the drought Thursday when they host Game 3.

INDIANAPOLIS - David West had 18 points and 11 rebounds to help Indiana even the Eastern Conference first-round series at one game apiece.

Danny Granger and George Hill each added 18 points and Paul George had 17 points and eight rebounds for Indiana.

Glen Davis led the Magic with 18 points and 10 rebounds, but he shot 5 for 16 from the field. J.J. Redick scored 13 points and Jameer Nelson added 12 for Orlando.

The Pacers were heavy favorites in the series because Dwight Howard, Orlando's All-Star center, is out with a back injury. Indiana lost Game 1 81-77 on Saturday, and the frustrated Pacers fought hard to avoid taking a two-game deficit to Orlando on Wednesday.