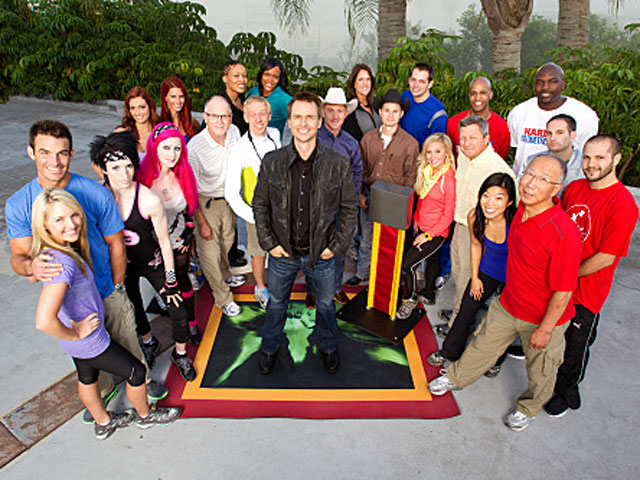 "The Amazing Race" has won seven Emmy Awards as Best Reality/Competition Show. The 18th edition kicks off on Sunday night with some old favoritesL: Eleven past losing teams have been invited back for chance to settle some "Unfinished Business." Phil Keoghan returns as the show's host.

What's all this "unfinished business" about?

In an "Early Show" interview Friday, Keoghan said, "We were listening to the fans and the fans were saying, 'What about all these teams that came so close to winning but for one reason or another just didn't quite make it over the finish line in first place?' They came so close, like the cowboys, one of the most popular teams we've ever had came so close but just missed out by mere minutes."

Others, Keoghan said, have also narrowly missed out on a win, and the show hoped to bring them back for a second try.

Co-anchor Chris Wragge said, "I do remember seeing them. I remember saying just something so small and insignificant like that."

"You're traipsing around the world and all of a sudden, you can't find your passport," Wragge said.

"It's kind of crucial to international travel," Keoghan said. "But what a horrible story, because people just loved these guys. So that's a heart-breaker, and if you think of (Lakisha and Jennifer Hoffman). And Jen is absolutely bursting to take a bathroom break. They're running toward the pit stop. We're in Beijing outside the Bird's Nest, the big stadium, and they decide that they have to stop for what is probably the most famous pee break in reality television history. What an unfortunate place to stop at that particular time. I guess in their particular case, it was finished business. And we've let them come back now to settle some unfinished business."

Will the teams play differently this time around?

"We knew they would," Keoghan said. "Just because, yes, they are more savvy. They've been on the race before. They've gone out into the word, and they've faced these challenges. So that's where we have to be prepared to really test them, like, test them mentally. Like with (a) particular challenge ... where we're in a shark tank in Australia. That's a real mind-over-matter challenge, to put them in a tank there with these live sharks."

"Amazing Race" has traveled all around the world, but this season they travel to Liechtenstein.

"Liechtenstein is a tiny country," Keoghan said. "I had to actually check it out on the map, I'll be honest with you. I heard of Liechtenstein, but it's not like you say the word Liechtenstein every single day. I searched it out on a little map and we got to go to Liechtenstein, and they have a great challenge to do there. We're always looking to go to new places. That's, to me, one of the great things about 'Amazing Race' -- every season, whatever you see behind the teams, it's always fresh, it's always new, it's always exciting."

Aside from "Amazing Race," Keoghan has chronicled a cross-country cycling journey to benefit multiple sclerosis (M.S.) in a documentary called "The Ride."

Keoghan called the documentary experience "a labor of love."

He explained, "This was 100 miles a day for 3500 miles. That's my dad there with me on the ride. People came out to ride with me. My friend Blake and I met people living with M.S. It was a long, arduous journey that I finished almost two years ago when we finished here in New York City. Rode from Los Angeles to New York City. And we've taken off 18 months to complete the film. All self-funded and we've done 10 screenings across the country. We've managed to sell out in every single location, and tonight in Times Square is our final screening in Times Square with Regal Cinemas. They've sponsored us and all the money from the box office is going to the M.S. Society to raise money.

You can see the season premiere of "The Amazing Race: Unfinished Business" Sunday night at 8/7 Central on CBS.