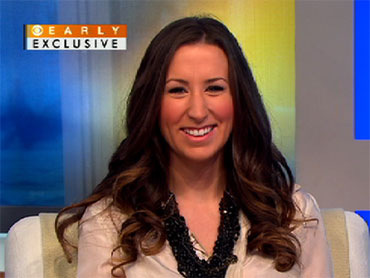 Could you solve a seven-word phrase with only one letter showing on "Wheel of Fortune"?

If you're Caitlin Burke, you can.

The 26-year-old "Wheel of Fortune" fanatic stunned on the show Friday when she correctly solved the phrase "I've Got a Good Feeling About This" with only the letter "L" showing.

The New York fashion magazine editor won a $6,500 trip to the Caribbean for solving the puzzle.

Smith remarked, "In our house, 'Jeopardy!' is on, we pay close attention, time to clean up and I'm doing the dishes and 'Wheel' is on over there. I have to say, I must have watched thousands of episodes. Nobody's ever done a seven-word puzzle with one letter?"

Burke responded, "That's because you're busy cleaning the house. You should be paying attention. You've got to pay attention to the puzzles."

But how did she know the answer?

"Just years of practice and watching," she said. "I don't know, you just try to instantly think of -- instead of getting so caught up on the letters on the board, rather than thinking this is a phrase. Seven letters, that's a phrase. How many of those do you know that start with 'I.' I've had the time of my life."

But what did host Pat Sajak think?

"He didn't say anything at first," she said. "He was just shocked. And I just wanted to see what I won. I was so excited. So much energy. He's like, hold on. Hold on."

Smith pointed out some people probably think the win was fixed.

Burke replied, "I guess that's flattering if people think that it's that great that it was fake. But, no. Anyone who has ever been on a game show would know, there's no way."

Growing up, Burke played both "Jeopardy!" and "Wheel of Fortune" with her father.

She explained, "He was always really good at 'Jeopardy!' He and my brother are both really great at 'Jeopardy!' I'm OK, but I think it takes some years of, like, cultural capital you need to build up. So I didn't really think that was fair. He was alive when some of those things were going on, I wasn't. I can't answer as well. Then 'Wheel of Fortune' would come on and I could shine and show him, I really had the skill set."

Burke told Smith she'd tried to get on the show for years.

"I think they must have a lot of people applying," she said. "And eventually they got back to me when I was in New York. I went to a big audition. Yeah, it was fun. There were a lot of people there so I guess it was hard. But I had a good time."

"Not that many people win that much money on 'Wheel of Fortune,'" Smith said.
Burke says she would love to come back to the show if they would have a tournament of champions type of show.

"They used to have that. Friday would be the championships. They don't do that anymore," she said. "So I don't know. I wish they would."

Of the whole experience, Burke says, "It's been crazy. (It's) more than I could ever imagine. And even just my friends and people that I haven't talked to in awhile are saying such nice things. It's really great."