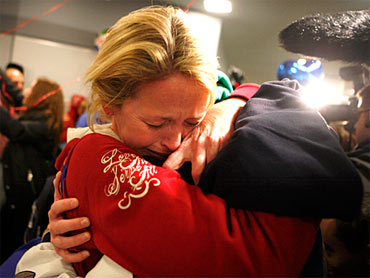 One hundred and sixty U.S. citizens are desperately waving their passports in the air in a chaotic scene at the airport of Haiti's devastated capital.

U.S. soldiers are sorting the Americans for evacuation, pulling Canadian, French and other citizens from the crowd.

One hundred and sixty U.S. citizens are desperately waving their passports in the air in a chaotic scene at the airport of Haiti's devastated capital.

U.S. soldiers are sorting the Americans for evacuation, pulling Canadian, French and other citizens from the crowd.

Muriel Sinai, a 38-year-old nurse from Orlando, Florida, says she's been at the airport without food or water since Wednesday - "We've had people crying, people passing out."

Beatrice Aristide, holding her 19-month-old daughter Stephanie in her arms, adds: "I don't know how much longer we can stand."

People without citizenship are angry. Says Vladimir Lexus, a 23-year-old musician who lives in Miami: "I can't believe this!"

Meanwhile, the U.S. relief effort ramped up Friday as military helicopters began ferrying water and other humanitarian relief supplies from an American aircraft carrier to a relief effort under way at the Port-au-Prince airport in earthquake-shattered Haiti..

Michael Wimbish, a spokesman at the U.S. Southern Command headquarters in Florida said Friday that the critical supplies are being transported from the aircraft carrier USS Carl Vinson, which arrived earlier in the day.

The influx of relief supplies has generally been met with bottlenecks everywhere, beginning at a main airport short on jet fuel and ramp space and without a control tower.

But the slow pace of relief efforts has started to frustrate quake survivors in Port-au-Prince. United Nations peacekeepers patrolling the capital said people's anger is rising and the Brazilian military warned aid convoys to add security to guard against looting.