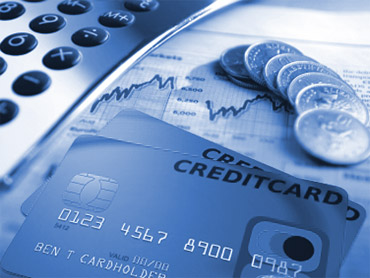 The rate at which credit card holders fell behind on their payments was far worse in the second quarter than it was last year, but did improve sharply from the alarming level seen in the first three months of 2009.

The shift since the first quarter shows that consumers handled their credit better even as job losses mounted and the recession deepened, according to credit reporting agency TransUnion.

TransUnion said the rate of bank-issued credit card payments that were 90 days or more past due shot up to 1.17 percent for the three months ended in June, from 1.04 percent in the 2008 period.

But the figure was down significantly from the first quarter of this year, when 1.32 percent of card holders were three months or more behind on the payments. That improvement came despite soaring unemployment and other economic pressures.

Long-term data shows that second-quarter payments are more likely to be made on time than payments in the first quarter. Typically, consumers use tax refunds or salary bonuses to pay off debt, often after running up card balances during the holidays.

But while a decrease in delinquencies in the second quarter from the first isn't unusual on a historical basis, it does mark the first improvement in a year. Moreover, the figures show less impact from the weak economy than expected.

"What's interesting about this year's decrease in the second quarter is we're still in a recession," said Ezra Becker, director of consulting and strategy in TransUnion's financial services group.

In addition to higher unemployment - the jobless rate in June - many people who still had jobs earned less, as employers cut back on hours, overtime and bonuses. "Since unemployment is a primary driver of delinquency, you would have expected an increase in delinquency," Becker said.

The fact that second-quarter late payments fell in that climate shows that consumers are handling their cards better, he said. The figures also reflect aggressive moves by lenders to cut back on credit limits and otherwise manage risk.

Not every statistic was positive.

The average debt consumers carry on their bank cards rose in the second quarter to $5,719, from $5,621 in the 2008 period. It declined only slightly from the first quarter, when the average stood at $5,776. Becker said that figure presents more evidence that people continue to rely on their credit cards, even as they may manage their payments better.

TransUnion samples anonymous data culled from about 27 million individual credit files to come up with the statistics. The agency tracks 90-day delinquencies on credit cards because that is considered a precursor to default, since a card holder would have to come up with four months of payments to bring themselves current.

The credit card delinquency decline follows TransUnion data that showed that the pace of growth for mortgage delinquencies also slowed in the second quarter.

Put together, it's reason for "guarded optimism," Becker said.

"A lot of the data on the economy shows that we have either begun a recovery or we're on the brink of recovery," he said. Credit statistics typically lag the economy, he said, so delinquency improvements are a positive sign for things to come.

As a result of the improved delinquency rate, TransUnion has scaled back its forecast for credit card delinquencies for the rest of the year.

The agency now expects the 90-day credit card delinquency rate to reach just over 1.2 percent by the end of the year. That's a big revision from its prior forecast for a rate as high as 1.7 percent by year-end.

The big question in coming months is what effect new federal regulations on credit cards will have on the industry.

The Credit CARD Act started to with rules that require banks to warn consumers 45 days in advance before raising interest rates, and to give them an option to close accounts and pay down balances at the old rates. Banks also have to give consumers 21 days to pay their bills after sending out statements.

In February, further rules will take effect regarding a host of issues, from how often credit card companies must review accounts after interest rate cuts to how cards are marketed to students. The aim is to give consumers more information regarding their credit and reduce surprises about things like interest rate hikes.

Becker said the law will have an impact on how banks lend and how consumers handle their credit.