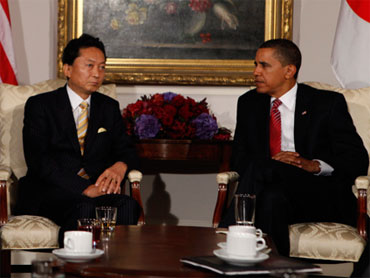 President Barack Obama and Japanese Prime Minister Yukio Hatoyama said Wednesday that their countries' alliance will remain strong despite recent signals by the new Japanese leader that he is shifting away from Washington.

The two did not address Hatoyama's plans to review the large U.S. military presence in Japan, an effort that stands in stark contrast to the staunchly pro-U.S. positions of the previous government in Tokyo.

After the talks, on the sidelines of the U.N. General Assembly, Obama described the relationship with Japan as a cornerstone of economic prosperity and security of both countries.

The United States is Japan's main military ally and a major trading partner.

Hayotama has said he'd like to put Japan's relationship with Washington on a more equal footing.

However, he played down the differences Wednesday, saying that "the Japan-U.S. alliance will continue to be the central pillar, key pillar of the security of Japan and Japanese foreign policy."

Kazuo Kodama, a Hatoyama spokesman, told reporters that Hatoyama did not raise the main points of contention - the relocation of a U.S. air station on Okinawa and Japan's decision to no longer refuel ships involved in the U.S.-led war in Afghanistan.

The U.S. and Japan had previously agreed to shut down the Marine air station on Okinawa and replace it with another somewhere else on the island. Many Okinawans want the base moved off their island, a position some members of Hatoyama's government support.

Kurt Campbell, the top U.S. diplomat for East Asia, and Jeffrey Bader, an Obama Asia adviser, told reporters that it is not entirely clear that Japan is insisting on renegotiating the deal. They may ask for new talks later, they said.

Without mentioning specifics, Hatoyama told Obama that Japan is determined to redouble its efforts at nation building and reconstruction in Afghanistan and Pakistan, Kodama said.

Obama said he wants to strengthen ties with Japan and cooperate on the global financial crisis, climate change and nuclear nonproliferation.

Hatoyama's election ended more than a half-century of almost uninterrupted rule by the pro-Washington Liberal Democratic Party. Obama said Japan's new leadership provides "an opportunity to strengthen and renew a U.S.-Japan alliance that will be as strong in the 21st century as it was in the latter half of the 20th century."