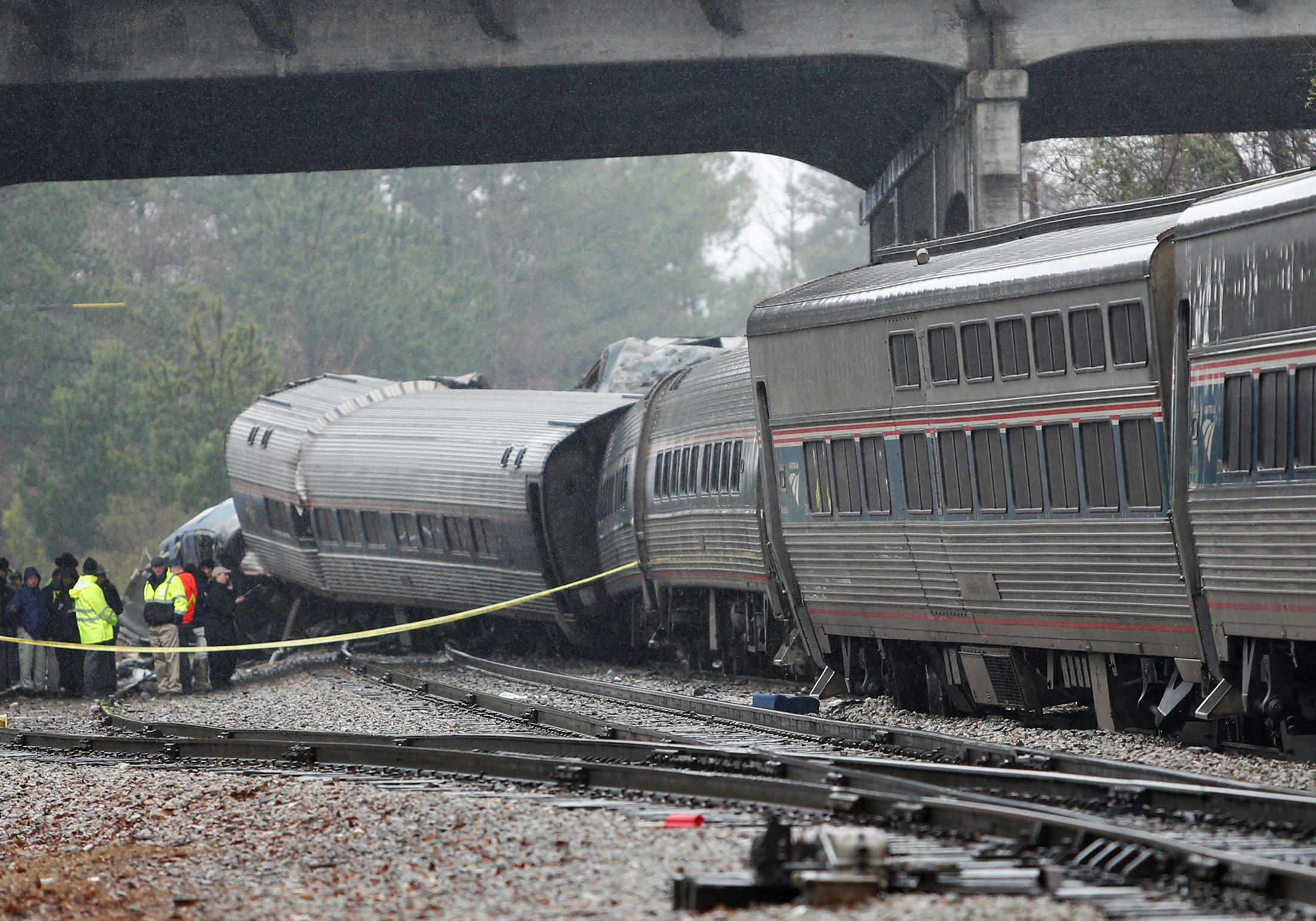 CAYCE, S.C. -- Federal investigators are trying to figure out why a switch was in the wrong position, sending an Amtrak train into a freight train and killing a conductor and an engineer in South Carolina.

But they already know what could have prevented the wreck that injured more than 100 passengers -- a GPS-based system called "positive train control" that knows the location of all trains and the positions of all switches in an area to prevent the kind of human error that can put two trains on the same track.

"It could have avoided this accident. That's what it's designed to do," said National Transportation Safety Board Chairman Robert Sumwalt, referring to technology that regulators have been demanding for decades with mixed success.

He said the passenger train hurtled down a side track near Cayce around 2:45 a.m. Sunday after a stop 10 miles north in Columbia because a switch was locked in place, diverting it from the main line. A crew on the freight train had moved the switch to drive it from one side track -- where it unloaded 34 train cars of automobiles -- to the side track where it was parked. The switch was padlocked as it was supposed to be, Sumwalt said.

The system that operates the train signals in the area was down, so CSX Corp. -- the freight railroad operator that runs that stretch of track -- was manually operating the signals. Sumwalt said it was too early to know if the signal was red to warn the Amtrak crew that the switch was not set to continue along the main train line.

Just hours after Sunday's crash, which also sent 116 of the 147 people on board the New York-to-Miami train to the hospital, Amtrak President Robert Anderson said there must be no more delays from the federal government in installing the safety system by the end of 2018.

He deferred to investigators about whether the system would have stopped this crash. "Theoretically, an operative PTC system would include switches in addition to signals, so it would cover both speed and switches," Anderson said.

The Silver Star was going an estimated 59 mph when it struck the freight train, Gov. Henry McMaster said. It was the middle of the night, and many people were jolted from sleep by the crash and forced into the cold.

"I thought that I was dead," said passenger Eric Larkin, of Pamlico County, North Carolina, who was dazed and limping after banging his knee.

Larkin said he was on his way to Florida when he was awakened. The train was shaking and jumping, and his seat broke loose, slamming him into the row in front of him, he said.

He said he heard screams and crying all around him as he tried to get out. Other passengers were bleeding.

Passenger Derek Pettaway told CBS News that he was sleeping when the train began "shaking violently" before coming to a sudden halt. "You knew we'd hit something or we'd derailed," Pettaway said over the phone. "The Amtrak crew was really great. They responded quickly and got everyone off the train."

Elliot Smith told Columbia newspaper The State he was at a friend's house when they heard what sounded like a propane tank exploding. Smith and his friend walked to the crash site and saw passengers of all ages beginning to exit the train.

"The sound was so loud, you instantly knew it was bad," Smith said.

The locomotives of both trains were left crumpled, the Amtrak engine on its side. One car in the middle of the Amtrak train was snapped in half, forming a V off to one side of the tracks.

"Any time you have anything that happens like that, you expect more fatalities. But God blessed us, and we only had the two," Fisher said, her voice choked with emotion.

Of the 116 people taken to four hospitals, only about a half dozen were admitted. The rest had minor injuries such as cuts, bruises or whiplash, authorities said.

On Wednesday, a chartered Amtrak train carrying Republican members of Congress to a retreat slammed into a garbage truck in rural Virginia, killing one person in the truck and injuring six others.

And on Dec. 18, an Amtrak train ran off the rails along a curve during its inaugural run near Tacoma, Washington, killing three people and injuring dozens. It was going nearly 80 mph, more than twice the speed limit.

With the recent string of crashes, "it's becoming almost like an epidemic for Amtrak," said Najmedin Meshkati, a University of Southern California engineering professor who has studied positive train control.