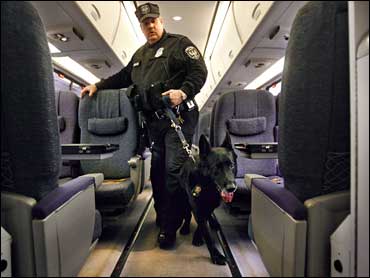 U.S. train passengers will have to submit to random screening of carry-on bags this week in a new security push that includes officers with automatic weapons and bomb-sniffing dogs patrolling platforms and trains.

The initiative, to be announced on Tuesday, is a significant shift for Amtrak, the national passenger railroad service. Unlike the airlines, it has had relatively little visible increase in security since the 2001 terrorist attacks, a distinction that has enabled it to attract passengers eager to avoid airport hassles.

Amtrak officials insist their new procedures won't hold up the flow of passengers.

"On-time performance is a key element of Amtrak service. We are fully mindful of that. This is not about train delays," Bill Rooney, the railroad's vice president for security strategy and special operations, told The Associated Press.

Nor will the moves require passengers to arrive at stations far in advance, officials said. Passengers who are selected randomly for the screening will be delayed no more than a couple of minutes, Amtrak chief executive Alex Kummant said.

"We're very conscious of the fact that you're in an environment where commuters have minutes to go from train to train," he said.

Concern about Amtrak security has been mounting since the 2004 bombings of commuter trains in Madrid that killed 191 people. Trains also have been bombed in London, where 52 people were killed in a series of blasts in 2005, most of them on subway trains, and in Mumbai, India, where 200 people were killed in 2006 on commuter trains. Russia also has had several bombings on subway, commuter and long-distance trains.

The new procedures draw heavily on measures being used in the New York City subways, Rooney said. That model has been upheld in court challenges, he noted.

Amtrak plans to roll out the new "mobile security teams" first on the Northeast Corridor between Washington and Boston, the railroad's most heavily used route, before expanding them to the rest of the United States.

The teams will show up unannounced at stations and set up baggage screening areas in front of boarding gates. Officers will randomly pull people out of line and wipe their bags with a special swab that is then put through a machine that detects explosives. If the machine detects anything, officers will open the bag for visual inspection.

Anybody who is selected for screening and refuses will not be allowed to board and their ticket will be refunded.

In addition to the screening, counterterrorism officers with bomb-sniffing dogs will patrol platforms and walk through trains, and sometimes will ride the trains, officials said.

Tim Connors, director of the Center for Policing Terrorism at the Manhattan Institute, said rail systems require a completely different approach to security from the one used in aviation.

"Rail moves a lot more people than air does," he said. "It's designed to be an open system that can move a lot of people fast."

"A random approach is actually more effective than a constant one," he said, adding that when procedures do not change, it is easier for would-be terrorists to find weak spots.