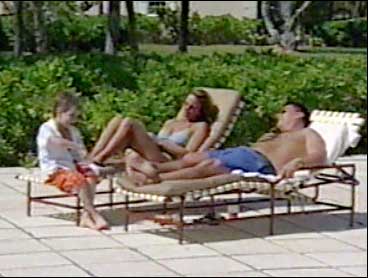 A three-month investigation by CBS This Morning Investigative Correspondent Roberta Baskin reveals an untold story of World War II. The three-part series, broadcast on This Morning Nov. 23-25, is available through links below. The text of some of the newly-discovered documents from the National Archives also can be accessed below.

Following is the third of Roberta Baskin's reports:

Clifford Byrum was 27 years old when he came face to face with evil. He even took pictures of it. That was many years ago: "I'm 82 years old and I was just a young man," he says. "It's been a long time. Long time."

In the spring of 1945, Byrum, an army captain and medical doctor, was a member of the Allied forces that marched into Germany and defeated the Nazis.

He recalls: "I just didn't know there were so many cruel people in the world. I mean absolutely cruel, had no feeling for human life."

Nothing had prepared him for what he saw and photographed in the small German town of Ruhen: "I observed all these innocent little babies that had been thrown in pasteboard boxes and buried," he says.

Hundreds of babies from this children's home died. But how?

The home was for Polish and Russian children. Their parents, prisoners in a Nazi labor camp eight miles away, were forced to work in the Volkswagen factory in Wolfsburg, Germany.

To Byrum, it was incomprehensible that 365 babies died at the Volkswagen children's home. The most common cause of death was listed as "too weak to live." That, he says, is "not a medical diagnosis. It's just an excuse."

Captain Byrum took part in an Allied investigation that exposed the home's unspeakable secrets. These secrets can now be given a voice through declassified Army documents.

A Russian aide told investigators: "The wooden walls were alive with millions of roaches and other insectsÂ… during the night we could see masses of these insects on the children."

A German nurse told of: "vomiting - distended and blue abdomen - the children did not live longer than eight to fourteen days - they became skinny and every child died in Ruhen."

A German worker reported being told, "We will take care that not so many Russian and Polish children will grow up."

It was clear to Byrum that the babies didn't die by accident: "It was absolute slaughter," he says. "My deduction was that whatever went on was set up as some plan because these babies all died, and the German babies lived. But the babies of the Polish and Russian mothers, they died."

As evidence of how little regard Volkswagen had for their forced workers, their children's death notices often came in their pay stubs.

Danish historian Therkel Straede researched the Volkswagen archives for a company-commissioned book on this dark chapter in its history. "Sometimes they would simply find out on pay day when they got their pay strip that a sum had been deducted for the burial of their child."

Straede adds, "Sometimes that was the only thing they got to know about it."

The babies got little in the way of a burial. Straede explains:
"They were taken by a gardener who was in charge of a nearby cemetery. He used to sing songs when he was underway with the dead bodies."

Byrum adds: "They just piled them in a box, a cardboard box, and buried them."

It was Captain Byrum's grim job to see that the bodies were exhumed. Byrum made the Germans do it. "We made them dig them so that they would see what the German people had turned into," he says.

The tragedy that happened here in central Germany, the murder of hundreds of babies, still divides the community. How much do people want to remember? How much do they want to forget?

It is past, but is it gone?

Hartwig Hohnsbein is a retired Presbyterian minister who spent years trying to get a plaque to remember one of the children's homes. But, he says, some Germans have blocked it: "It is past, it is gone. The oldest, most Â… they wouldn't Â…they wouldn't hear of these things."

Today, in Ruhen, a monument now rests at the site of the mass grave where the babies were buried, where Captain Byrum took his haunting photographs 53 years ago.

Today, Dr. Byrum is a great-grandfather and a retired obstetrician. His profession is perhaps a result of his experience.

His photos stir up forgotten memories for Byrum: "I don't understand how human beings are treated this way. These were live babies at one time."

Volkswagen declined This Morning's request to be interviewed on camera. They responded with a letter that calls forcing infants to be taken from their mothers: "another manifestation of the inhumanity of the Third Reich in World War II." The letter continues: "For the management and employees of the Volkswaen of today, the moral and historical lessons and obligations are clear and direct. We cannot forget the past, but we must learn from it in order that it is never repeated in the future."

The letter points out Volkswagen's multi-million dollar commitment to social projects, from schools to orphanages and homes for the aged and infirm. Many are in the places the slave laborers once lived, such as Ukraine.