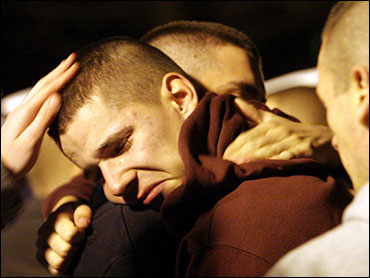 "The sheer stupidity of it all will never make sense" — so reads part of the introduction to the electronic "wall" on PlanetBlacksburg.com, where hundreds have commented on Monday's massacre at Virginia Tech.

One venue for such messages is Craigslist — one of the Internet's most popular forums for buying, selling, dating and discussing. Cities big and small have their own pages on the sparsely designed site, including Blacksburg, Va.

Until this week, the Blacksburg Craigslist page was one of the site's quietest corners. A few posts a day about a proposed Wal-Mart made up most of the content on the "Rants and Raves" page. But soon after word of the shooting massacre on the Virginia Tech campus spread on Monday, this Craigslist page became a destination for people from around the country to offer their thoughts, prayers and sympathies.

The deaths of 33 people at Virginia Tech, including the gunman, resulted in hundreds of postings over the past two days, including those of people from cities that had witnessed similar tragedies. "This is horrible and the people of Colorado have dealt with this type of tragedy and it doesn't get easier hearing that it happened somewhere else," said one poster from Denver, referencing the Columbine High School shootings in 1999. "Please know that people all around the country are thinking of your community."

Other postings showed that the shooting has brought together people from different schools, including rival West Virginia University. "I hope that you can begin to heal, and know that the Mountaineers are behind you," one message read.

Most of the postings were short, simple statements telling Blacksburg residents and the Virginia Tech community that they are in many people's thoughts and prayers. Many included pictures of candles. Yet to look at the page is to look at the reaction to the events unfold in real time — simple expressions of grief gave way to people asking questions, venting anger, or even making inappropriate remarks (a posting titled "Proof only one race belongs in America" was harshly criticized soon after it appeared).

"Has anyone got any reliable info on who the shooter is? Is he dead or in custody? Was there more than one? Any truth to the rumors it was a Muslim foreign student?" one person asked Monday night in one of several postings referring to allegations that the gunman — eventually revealed to be Korean national Cho Seung-Hui, a 23-year-old senior — was perhaps inspired by religious fervor.

Other messages made allusions to the gun control debate, or asked why police did not take stronger action after two people were killed in a residence hall two hours before most of the killings. "The campus should have been locked down, the shooter should not have been able to wander around campus, unhindered, for over two hours after committing the first murders," one poster said.

But sympathy and concern are the dominant themes on Craigslist, and similar messages have shown up all over the Internet. On social networking site Facebook, some Virginia Tech students have replaced their profile photos with an image of the school's VT logo imposed over a black ribbon. Students from other schools have created images pairing their school's logo with that of Virginia Tech, with the message "Today, we are all Hokies" written below.

On PlanetBlacksburg.com, a site normally focused on news, sports and entertainment in and around Virginia Tech, the electronic wall had received 458 comments as of Tuesday afternoon.

"Forget all the stories, forget the media feeding frenzy, we at Virginia Tech face immense sorrow for our loss, for the senseless murder of our brothers and sisters. Monday brought the slaughter of innocents. Our innocents," a note from the site's owners said.

Many comments on the wall came from places as varied as China and France. "All the way in New Zealand... Just let you know even though you're so far away, we're thinking of you," one person, identified as Kat, said. "God will be righteous and just."

PlanetBlacksburg.com also drew many postings from alumni, and even a message signed by the board of trustees of the Connecticut State University system. "Although we are miles away in Connecticut, distance does not diminish the depth of our heartfelt sorrow for the people of Virginia Tech," part of the message read.

Like other places online, the wall served as a venue for people to ask deeper questions about how such an event could occur. "How can this keep happening? How resilient is our human condition that we can absorb yet another senseless act of violence so offensive? What becomes of us as these incidents continue to mount?" asked one message, authored by Garrett Evans.

But for all the questions, anger and sadness, there are also signs of hope and resilience. "Please attempt to focus on the love, the life many of us are resolutely protecting," a message from Ingrid in Alberta, Canada, reads. "Continue to be human and soft despite these horrific abuses."

Some of the most encouraging posts are from Virginia Tech students, parents and alumni, who invoke Hokie Pride in trying to help others cope. "Now more than ever Hokies everywhere need to show their support of our wonderful school!" one person, identified as Erica, wrote. "Hokie Spirit will not be broken."
By David Miller