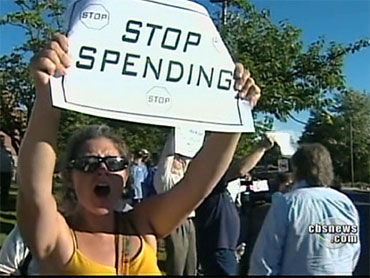 (CBS)
My uncle spent his early 20's slugging his way through France with Patton's Third Army. My dad, who was just about the same age, served in the Pacific. When they returned to civilian life, one was ideologically liberal-left, the other ideologically conservative-right. (It's not important who was who.) What is important is how they concluded their (often) spirited arguments about the political issues of the day - with smiles and jokes and a good meal shared with the family.

Years after my father died, I asked my uncle how their verbal sparring always seemed to end on an upbeat note. "Your dad may have been mostly wrong most of the time," he said with a twinkle, "But he and I could disagree because in the end, we're all Americans. There's a baseline of trust. It was always all right."

A baseline of trust. I was thinking about what he said after reviewing a week's worth of headlines chockablock with stories quoting people screaming about truthers, birthers, socialists, communists, fascists, Nazis, secessionists, and racists. (And you thought the Mac vs PC debate got a little nutty sometimes?)

Consider the latest breathless controversy about the president's plans to deliver a speech to public schools students next Tuesday. I hadn't read the details so I pulled up the announcement sent out by Education Secretary Arne Duncan to school principals. It says:

"During this special address, the president will speak directly to the nation's children and youth about persisting and succeeding in school. The president will challenge students to work hard, set educational goals, and take responsibility for their learning."

Part of the day's event will be to encourage teachers to create lesson plans around the speech and help their students learn more about Obama as well as previous presidents.

"(The president) will also call for a shared responsibility and commitment on the part of students, parents and educators to ensure that every child in every school receives the best education possible so they can compete in the global economy for good jobs and live rewarding and productive lives as American citizens," Duncan said in a press release.

As far as news stories are concerned, that's about as bland as they come. But after learning about the announcement, Florida Republican Party chairman Jim Greer issued a statement condemning the use of taxpayer dollars "to indoctrinate America's children" to Obama's socialist agenda.

"As the father of four children, I am absolutely appalled that taxpayer dollars are being used to spread President Obama's socialist ideology. The idea that school children across our nation will be forced to watch the President justify his plans for government-run health care, banks, and automobile companies, increasing taxes on those who create jobs, and racking up more debt than any other President, is not only infuriating, but goes against beliefs of the majority of Americans, while bypassing American parents through an invasive abuse of power."

I suppose this marks political progress, of a sort. Last month, protesters carried signs of the president dressed as Hitler. Now he's being billed as the second coming of Trotsky. At this point, one is tempted to pull out the apt retort offered by Representative Barney Frank, when someone showing up at a town hall meeting last month and likened the bill to Nazism. On what planet do you spend most of your time? It's hard to figure out the source of this wellspring of outrage, especially since this does not mark the first time a U.S. president has organized a chat with the kids. In fact, Washington Monthly's Steve Benen points out that in 1988 Ronald Reagan used a C-SPAN broadcast to riff on contemporary political issues. And here's a clip of George H.W. Bush in 1991 talking up education policy during a televised classroom speech. (Some on the left mildly complained at the time. Turns out they were wrong as the presidential addresses were entirely forgettable.)

I'm sure President Obama, as gifted a public speaker as there is on the contemporary American scene, does not plan to waste his moment before the mike boring a bunch of grade schoolers with a harangue about the joys of TARP or the failure of single-payer medicine. But Greer's reaction - and he's not alone urging resistance to the looming menace of red insurrection - testifies to a bigger worry: that the baseline of trust which my father and uncle once shared is fragmenting right before our eyes. It's hard to avoid that dreary conclusion when Obama's plan feeds talk of a boycott with angry parents promising to keep their kids at home for the day. And all because their kids have a play date to watch the commander-in-chief on the school telly.

Some maintain this is due to the ravings of irresponsible blow-hards on radio and cable television. True up to a point, but that just skims the surface. A more persuasive argument is served up by Patricia Williams, a professor of law at Columbia University. Williams finds a link between the breakdown in the national discourse and a world that "truly has been turned inside out, by the election, by the economy, by the precarious conditions that threaten us all."

So it is that August was flooded with YouTube videos featuring average citizens hysterically sobbing at town hall meetings while bemoaning the loss of "their America." Over the top? You bet. But Williams writes that their reactions also reflect a fear of losing a defined place in the American hierarchy of power relations. This is an expression of angst that their world is being "turned upside down."

So it is that we get death panels and Obama turning into the new Fuehrer (albeit one born in Kenya.)

"...Much of the epic woe is not about healthcare or public options. It's about roiling resentments that need to be dressed up as something else, the coded mummery of Halloween monsters hybridized into new chimeras of hate. It's about fear that precious resources are being transferred to "alien" others. Fear that the gains of others are ill-gotten, leaving the lonely patriot survivalist as victim, "thrown away," trash. In these fiery monologues, even our president is figured as conspiratorially alien-birthed, from a galaxy far, far away, who's just pretending to be one of "us."

If Williams is right - and I fear that she is - then light a candle for the future and pray for the best. I don't know whether political polarization has passed the point of no return but it's getting fugly out there. Have a happy Labor Day.