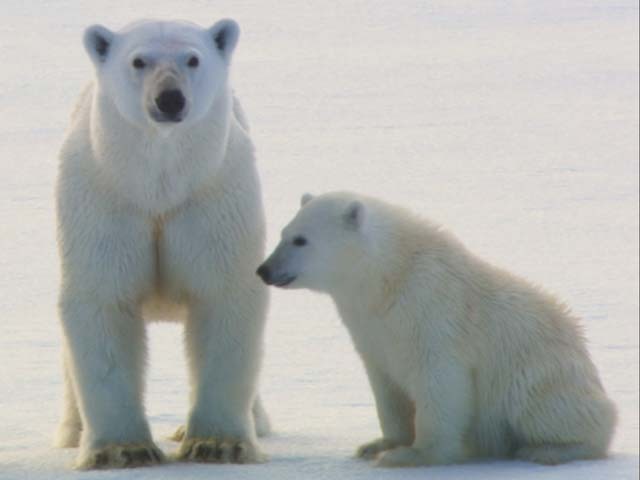 Twisted lines of ancestry seem to have intertwined two very different species: the water-loving polar bear and the forest-loving Irish brown bear. Despite being so different, the two seem to have found love: Meeting and breeding at least once during the last 120,000 years, the two species gave rise to the polar bears we know today.

"The Irish genetic sequences are much closer to the modern polar bear," said study researcher Daniel Bradley, of Trinity College Dublin. "As the climate has changed, what we are seeing is the tracking of that climatic change in the sequences in the bears." [Real or Fake? 8 Bizarre Hybrid Animals]

The researchers started by analyzing the DNA of brown bears from Ireland and comparing it with that of ancient and modern polar bears. They used samples from bear skeletons found in Irish and British caves. The oldest skeletons were 120,000 years old and the youngest were at least 3,000 years old, the latter having died shortly before the bears went extinct in the area.

Comparing a special kind of genetic material -- called mitochondrial DNA -- of these bears, the researchers found the modern polar bear's DNA was very similar to that of the Irish brown bears. The bears seem to have intermixed their DNA in the last few dozen millennia, sometime between 20,000 and 50,000 years ago.

"It's interesting because polar bears really are marine animals," Bradley said. "That's not the case for these brown bears."

Previous DNA evidence has linked polar bears to Alaskan brown bears originating in the ABC Islands (which consists of Admiralty, Baranof, and Chichagof) about 14,000 years ago. While both groups are brown bears, Bradley said that the Alaskan bear genetics doesn't match the polar bear as well as the Irish bears' does.

Earth's climate swung saw warmer and colder periods during the Irish bears' reign. As it changed, so did the bears' habitat. During cool times, the brown bears may have encountered polar bears on the ice that covered their normal habitat, while in warm times, the polar bears might have left their watery homes in search of food.

Our current climate is also showing evidence of polar-brown bear hybridization. Grizzly-polar (also called prizzly or grolar) bear hybrids are popping up in the Canadian arctic, and seem to be fertile, resulting in second-generation hybrids, a very unusual event for wild animals.

Hybridization might be what each species needs to survive changing climate, or it might result in a whole new species that fills a new ecological corner. Learning more about the genetic history of the polar bear, and about these brown-polar hybrids, could help inform conservation strategies for both, said study reasearcher Beth Shapiro, of Pennsylvania State University.

Charlotte Lindqvist, a researcher at the University of Buffalo in Buffalo, N.Y., who wasn't associated with the study, said she needs more data to come to the same conclusions as Bradley and Shapiro. She recommends sequencing longer sections of the mitochondrial DNA and taking a look at the nuclear DNA.

"Oftentimes...those relationships can change around as you go from mitochondrial data to nuclear data," Lindqvist told LiveScience. "That [additional data] could change the story around completely."

Bradley agrees researchers need to take a closer look at the nuclear DNA.

"We haven't done that yet," he said, but added that he thinks the mitochondrial data is sound. "Before this data, the closest brown bear sequences were in Alaska, but our sequences were much closer."

The study was published July 7 in the journal Current Biology.