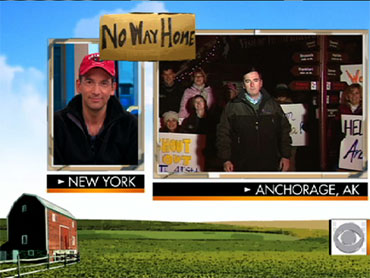 For ten days, "Early Show" viewers voted for the place they'd like weather anchor Dave Price to be when he starts his second "No Way Home" journey Friday.

And when all the ballots were counted, from both mobile phone and online voting, the choice was -- Anchorage, Alaska's largest city, Dave revealed on the show (from New York!) Thursday.

Anchorage used a last-day surge to fend off a late challenge from the lighthouse.

Dave will begin his weeklong adventure with only a one-way ticket, $50, some technical devices (including a Windows Phone provided by Microsoft to record his travels) and his wits to get him back home to New York. Oh - and the kindness of strangers.

-- He will travel with a backpack, laptop, and cell phone.

-- No credit cards, no IOUs, no calling Mom or Dad and asking for a loan.

-- No one individual or corporation can help Dave travel more than 1,000 miles in the lower 48 states. Outside the contiguous U.S., the max is 1,500 miles. (This includes commercial airline flights)

-- If Dave earns money he can spend it as he likes!

As Dave prepared to leave for Anchorage, the city's mayor, Dan Sullivan, offered him words of wisdom on navigating his way through, and eventually out of, Alaska -- after Maggie Rodriguez announced that Anchorage had won: