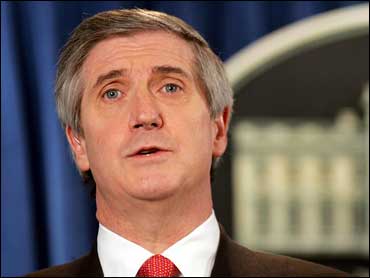 (AP (file))
Andrew Card, who was White House Chief of Staff for the majority of the George W. Bush administration, is seriously considering a run for the Senate seat formerly held by Sen. Edward Kennedy, a prominent Republican tells the Associated Press.

Ron Kaufman, a political strategist and friend of the former Bush aide, said Republicans are pressuring Card to consider a run. In an email to the AP, Kaufman said that Card, a Massachusetts native, has not yet decided whether to enter the race.

Primaries will take place in December and the general election will be held in January for the seat.