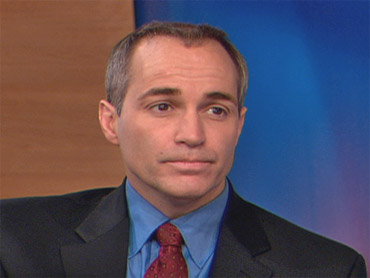 A former aide to John Edwards fired back at Rielle Hunter, the former mistress of the ex-Senator and vice presidential candidate, a day after her tell-all interview was published.

Andrew Young, who is in a legal dispute with Hunter over an alleged sex tape of her and Edwards, scoffed at the idea that the politician was still in love with Hunter.

"I think John Edwards is telling Rielle Hunter and Elizabeth (Edwards) whatever he needs to tell them to make them do whatever he wants them to do," Young told CBS' "The Early Show" Tuesday.

In her interview with GQ, Hunter said of Edwards: "I know he loves me. I have never had any doubt at all about that," Hunter said. "We love each other very much. And that hasn't changed, and I believe that will be till death do us part."

They were Hunter's first public comments since she became known as Edwards' other woman in 2008. Hunter didn't provide any details of their status but said Edwards is a great father who wants to be there full-time for their daughter, now 2.

Young also said Edwards was funding Hunter's lawsuit against him.

"I don't know how she's paying hundreds of thousands of dollars for lawyers to put me through my paces for three weeks," Young said, adding, "I can't think of anyone else who would to it other than him."

Hunter said of Young: "I think Andrew will grow and evolve even if it's behind bars."

Superior Court Judge Abraham Penn Jones ruled Young was not in contempt of court for his accounting of how he handled items that Hunter is seeking. The North Carolina judge had threatened to jail Young earlier this week and said he was troubled by a series of conflicting statements that Young has made under oath.

Jones said he wasn't sure if Young and his wife had purposely disobeyed his orders.

"You know and God knows, but I don't know," he said. The judge said he is still considering whether to refer the case to the district attorney for a perjury probe and warned the Youngs that they would face future troubles if they're lying now.

In his interview with "The Early Show", Young bristled at Hunter's comments that he idolized Edwards and offered to claim paternity of the child Edwards had with Hunter.

Young said as someone who had worked closely with the politician for 10 years, he felt compelled to help Edwards, who, he said, seemed crushed by his wife Elizabeth's cancer prognosis.

Of his decision to help cover the affair up, Young said it was not smart. "But people keep asking how did you think could you get away with this. Stupid thing about it is that it did work," he said, claiming that Edwards was a leading candidate to be Barack Obama's running mate in the summer of 2008.

Hunter also posed for photos for GQ that show her on a bed, barelegged in a man's white dress shirt and a pearl necklace. In another shot, she's lying on her back holding her daughter in her arms.

She said she and Edwards had an immediate connection when they met at a New York City hotel in 2006, and she said she knew then that she was a special person to him.

"He in fact did say to me the first night, 'Falling in love with you could really (expletive) up my plans for becoming president,"' she said.

Hunter said she told him he shouldn't run for the White House and suggested he at least wait until April 2007 because her intuition and astrology suggested he would have a difficult first three months of the year. Elizabeth Edwards' cancer returned in March of that year. Hunter said John Edwards wanted to exit the race but that Elizabeth Edwards wanted him to stay in.

"And my surprise was that they stayed in the race," Hunter said. "I was shocked. I really viewed it as reckless."

Hunter said Edwards' marriage was already in shambles before their romance, declaring, "I was not the home wrecker." She said people were wrong to believe Edwards had fallen because of the affair and its revelation.

Instead, "I think that he thinks that he is a much wiser and a much better and a more truthful and a more integrated human being," she said.

John and Elizabeth Edwards are now separated. Hunter said the affair ended in July 2008 and that the relationship is now something "different."

Edwards hired Hunter to work as a campaign videographer in 2006 as he plotted his second run for president. The former North Carolina senator's political action committee paid her video production firm more than $100,000.